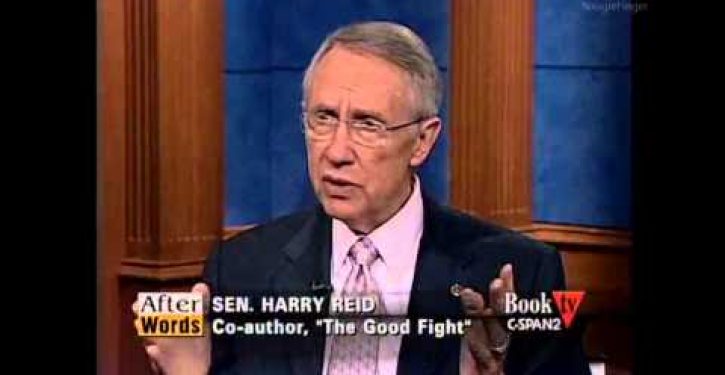 Just like so many other issues, the Democrats in charge have completely reversed their passionately spoken beliefs on the so-called nuclear option, or the “filibuster” rule. In a nutshell, the new Senate rule allows Obama to push his nominations through with a simple majority rather than the centuries-old tradition of requiring 60 votes.

As reported by Reuters today, Senate Majority Leader Harry Reid “led the charge on the rules change, accusing Republicans of record obstructionism and saying the American public is right to believe that ‘Congress is broken.'” But he once told c-span that he thought invoking the nuclear option would “ruin the country.”

In a letter, he wrote:

“I am also aware that the Founding Fathers established the filibuster as a means of protecting the minority from the tyranny of the majority — and that protection, with some changes, has been in place for over 200 years.”

But today, Obama said, “If you got a majority of folks who believe in something, then it should pass,” as reported by Business Insider.

President Obama knows better. He is a constitutional scholar. At one point in history, the majority believed in slavery. The founding fathers repeatedly warned America about the tyranny of the majority.

“The accumulation of all powers, Legislative, Executive, and Judiciary, in the same hands, whether of one, a few, or many, and whether hereditary, self-appointed, or elective, may justly be pronounced the very definition of tyranny.”

In 2008, the Wall Street Journal reported that Reid said he “would never turn to the nuclear option, saying it would be a ‘black chapter in the history of the Senate.'”

“I really do believe it will ruin our country.” [emphasis added]

In 2005, Harry Reid posted a statement (since scrubbed) on his website invoking the founding father’s vision of limited government and checks and balances that was captured by RealClearPolitics.

Of the nuclear option, Reid said in part,

“But now, in order to break down the separation of powers and ram through their appointees to the judicial branch, President Bush and the Republican leadership want to eliminate a two-hundred-year-old American rule saying that every member of the Senate can rise to say their piece and speak on behalf of the people that sent them here.”

This week, President Obama pushed to get rid of opposition to his appointees in a press release where he says in part,

“…it is time for simple yes-or-no votes without further obstruction or delay.”

But in 2005, then-Senator Obama had quite a different take, declaring, (at ObamaSpeeches.com),

“I rise today to urge my colleagues to think about the implications the nuclear option would have on this chamber and this country. I urge you to think not just about winning every debate, but about protecting free and democratic debate.”

“What they [the American people] don’t expect is for one party – be it Republican or Democrat – to change the rules in the middle of the game so that they can make all the decisions while the other party is told to sit down and keep quiet.”

Biden totally freaked out over the nuclear option in 2005:

Watch a compilation of Biden, Reid, Feinstein, Schumer and others decrying the “nuclear option,”