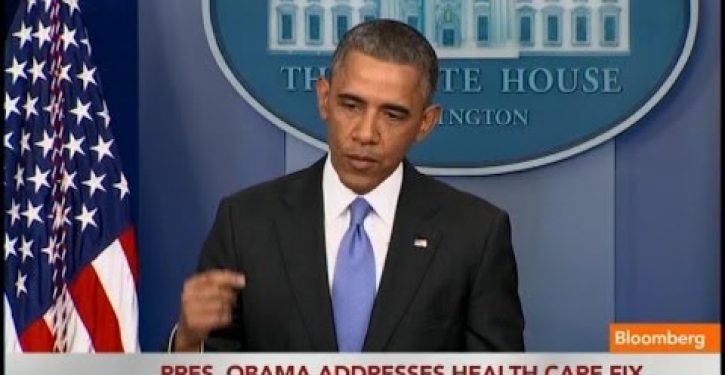 When called on the carpet about his broken promises last week by CBS News’s Major Garrett, Barack Obama lied (again), stating “On the website, I was not informed directly that the website would not be working.” It’s hard to know what the Clintonian-sounding qualifier directly is supposed to signify in that sentence; either you’re informed or you’re not. In any case, White House Press Secretary Jay Carney confirmed yesterday that Obama was told in March that the website was beset with numerous problems affecting its functionality and the security of the end-user.

But in his remarks at the podium in the White House briefing room, Obama went on to say this (1:06 in the video below):

I’m accused of a lot of things. I don’t think I’m stupid enough to go around sayin’ this is gonna be like shoppin’ on Amazon or Travelocity a week before the website opens if I thought it were’n gonna work. [Emphasis added]

One might coyly ask how stupid he thinks he is, but the answer is fairly obvious. He has made it clear repeatedly throughout his presidency, mainly through his overt shows of contempt for who disagree with him, that he has a lofty opinion of his own intelligence. He has not been alone. The most famous independent assessment of Obama’s IQ is that of historian Michael Beschloss, who told talk show host Don Imus in November of 2008 that “Barack Obama is the smartest man ever to be elected to the presidency.” (These words may end up being Beschloss’s epitaph.)

The website ezinepost.com answers the question “How smart is Obama?” with two words, “Scary smart,” but the text that follows suggests the post’s author, Mike Breen, was being tongue-in-cheek.

Up till now, opinions on Obama’s smarts have been made mostly in passing. But now that he uttered the words I and stupid in the same sentence, several new commentators have made substantive arguments that the president’s handling of the Affordable Care Act to date show him to be a nitwit. On Sunday, Alan Caruba of the Canada Free Press penned a column titled “Is Obama Brilliant or Stupid?” In it, he writes:

When people start to defend themselves by saying out loud that they are not stupid, there’s a better than average chance they are stupid and, like most stupid people, are denying it.

The facts reveal that he was stupid enough to believe ObamaCare would work. He let the law go into effect knowing that Healthcare.gov was not ready to sign up people and that millions were going to lose the insurance plans they had.

Your health care adviser, Zeke Emanuel,  advised you to hire a proper engineering manager to oversee the development of this massive technical project.  Your team of economic advisers gave you that advice as well.  You chose to ignore them and appointed a policy wonk to that position. But I forgot — you’ve said in the past that you are a better speechwriter than your speechwriters, and you know more about policies on any particular issue than your policy directors.  So it makes sense that you would ignore the advice of the people you hired to advise you.  You are a perfect example of the Dunning-Kruger effect.

The article is worth reading its entirety. Its bottom line might be summed up as, “The president acted stupidly.”

The Washington Post (yes, that Washington Post — the one that helped get Obama elected twice) includes the “stupid” remark in a list mocking the president by listing his “nine best quotes” from the news conference.

All in all it’s been a bad half year for the president. His signature law is in serious trouble and so are the course of his second term and his legacy. His administration has tried to repair some of the damage by discontinuing references to the Affordable Care Act as Obamacare, but that’s putting lipstick on a pig. Which is part of the problem. Obama is still convinced he can win hearts and minds through a combination of charm and cosmetic fixes to disasters he is created. A wiser man would have learned by now that such actions are futile.