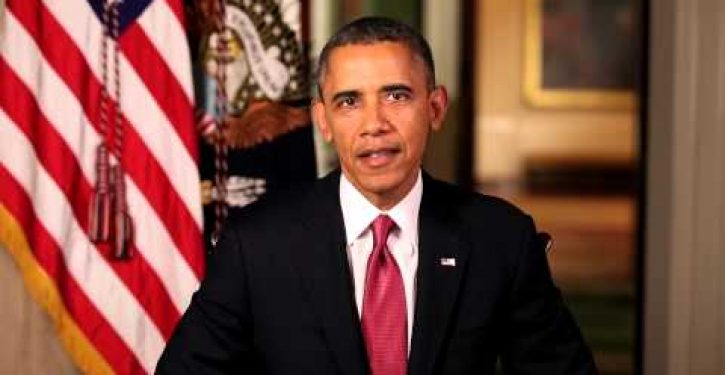 Perhaps Fox News’s Todd Starnes was reading too much into an email from Barack Obama’s dark money group Organizing for Action. Starnes noted that the email contained the claim “Together, we’ve made serious progress as a nation under President Obama” and wondered aloud whether the writers were hinting at the phrase “one nation under Obama.”

If Starnes was overreaching, it was only because Obama — protestations to the contrary notwithstanding — appears to have no use for God. He never misses a chance to delete mention of the Almighty from historical documents that contain one.

The most recent example, station WMAL writes, was earlier today in his recitation of the Gettysburg Address, to mark its sesquicentennial. Obama skipped the official ceremony at Gettysburg, which is inexcusable even if it was, as White House spokesman Dan Pfeiffer tweeted, because of the “whole website thing.” But even more inexcusable was Obama’s galling omission of the words under God from the speech.

Four score and seven years ago our fathers brought forth on this continent a new nation, conceived in liberty, and dedicated to the proposition that all men are created equal.

Now we are engaged in a great civil war, testing whether that nation, or any nation so conceived and so dedicated, can long endure. We are met on a great battlefield of that war. We have come to dedicate a portion of that field, as a final resting place for those who here gave their lives that this nation might live. It is altogether fitting and proper that we should do this.

But, in a larger sense, we can not dedicate, we can not consecrate, we can not hallow this ground. The brave men, living and dead, who struggled here, have consecrated it, far above our poor power to add or detract. The world will little note, nor long remember what we say here, but it can never forget what they did here. It is for us the living, rather, to be dedicated here to the unfinished work which they who fought here have thus far so nobly advanced. It is rather for us to be here dedicated to the great task remaining before us—that from these honored dead we take increased devotion to that cause for which they gave the last full measure of devotion—that we here highly resolve that these dead shall not have died in vain—that this nation, under God, shall have a new birth of freedom—and that government of the people, by the people, for the people, shall not perish from the earth. [Emphasis added]

Here is Obama’s reading of the speech from the White House. His omission of the highlighted phrase comes at the 1:35 mark.