Those darned Europeans are so attached to their picturesque views.  When it comes to wind power and wind-turbine farms, the honeymoon is over.  The bloom is off the rose.  Rate-payers, homeowners, holiday-makers: if you’re wind, it turns out that Europeans can quit you.

It was being reported ominously, two years ago, that the Dutch – the Western world’s quintessential pioneers of wind power – were really starting to be over wind.  Not only is it expensive and unreliable; it’s just so…unsightly.  In the 21st century, we aren’t talking pretty, old-fashioned windmills that creak gently and make the Netherlands look its postcard-landscape best.  We’re talking about those towering monstrosities in vast phalanges that whir menacingly, slaughter birds, and mar world-heritage vistas – all while, who knows, causing cancer to boot.

One year ago, UK Minister of Energy John Hayes caused great rejoicing in the land – probably the first such event ever in human history – by proposing to put a hard cap on the number of wind farms that can be erected in the United Kingdom.  Daily Mail author Christopher Booker pointed out the following at the time:

[T]he amount of power [wind turbines] generate is so derisory that, even now, when we have built 3,500 turbines, the average amount of power we get from all of them combined is no more than what we get from a single medium-size, gas-fired power station, built at only fraction of the cost.

No one would dream of building windfarms unless the Government had arranged to pay their developers a subsidy of 100 per cent on all the power they produce, paid for by all of us through a hidden charge on our electricity bills.

Equally telling are the titles of related stories appended to his editorial:

Nobody wants a wind turbine in his back yard.  U-G-L-Y, they ain’t got no alibi.  They ugly! Problem is, in a place like Europe, offshore wind is in people’s back yards too, just as it is in, say, Massachusetts.  Folks don’t want offshore wind farms too close to shore.  They ruin the view, interfere with the commercial fishing, and make boating and other water activities less pleasant.  They also threaten the UNESCO world-heritage designations of beloved national landmarks, which are usually major tourist attractions and money-makers for local economies.

Moving the wind farms further offshore isn’t a solution, however.  Doing that just makes the electricity way too expensive per megawatt-hour for even the most power-hungry consumer or optimistic utility regulator.  Germany, which jumped into wind power with all 162 million feet, has been finding not only that residential consumers decline to support uneconomic electricity sources by keeping their grid-supplied energy use up, but that industrial users are being priced out of competition with foreign companies that have the advantage of cheaper energy.  In the meantime, overenthusiasm for offshore wind has already produced company closures, major layoffs, and idled capital in the German wind industry: a blow to tens of thousands of workers and investors in an already sluggish economy.

Europeans have a choice to make, and it isn’t going to wait much longer.  The privileged, subsidized position of “renewable” electric power is doing what it was supposed to in Europe:  driving out coal and nuclear power-generation sources.  Literally, it is driving them out: threatening to kill them, by making them impossible to run at a profit.  The reason is that, although coal and nuclear power generation are reliable, where wind and solar are not, coal and nuclear have the operational limitation that they can’t easily be cut back or shut down and then restarted.  They don’t degrade gracefully when demand is low.

Coal and nuclear are superb – reliable and cost-efficient – when they generate the power grid baseline, with natural gas and renewables adding power, either on-demand (gas) or when they can, given the weather conditions (wind and solar).  It doesn’t work the other way around, however.  Coal and nuclear produce too much power, and necessarily must produce too much, in a grid-infrastructure role, to function economically in the role of additional power sources.  It’s against their nature, at least in today’s technological conditions, to only be needed or available sometimes.

Of course, for self-appointed environmentalist zealots, this energy-market dynamic is a feature of the push for renewables, not a bug.  But renewables can’t actually supply all of Europe’s energy needs: not if Europeans expect to keep from freezing in the winter, or expect to keep lights on and things like hospitals, ethanol factories, and organic-produce stores running.  (Certainly not if they want to favor electric trains and electric cars over internal-combustion transportation.)

Forcing the unnatural on the energy market – forcing the power-grid baseline to the fluctuating level of what renewables can produce – is forcing a moment of choice on Europe: whether to drive out coal and nuclear altogether, or find a way to keep them in operation, knowing that the day will come when it’s too cold or dark to do without them.  Maybe gas will always be cheap and available.  But maybe it won’t.  Is it smart to rush away from coal and nuclear: to lose capacity by conscious choice, as if it’s easy and quick to get it back when you find out later that you need it?  Is it smart, in particular, when the public is so stubbornly resistant to the wind-turbine blight (and is also starting to notice the denuding of national-heritage lands for corn-ethanol production, among other downsides of renewable fuels)?

Of course, America can ask herself the same questions.  But we haven’t yet started the breaking-wind process to quite the extent the Europeans have.  The latest news from Europa is that a chateau-owning couple in the Pas-de-Calais, on France’s North Sea coast, has won a judgment in court against a wind company that put up 360-foot, view-obstructing turbines near their property in 2007.  According to the couple:

“The first evening when we arrived in the chateau (from Anvers in Belgium) after their construction, it was a firework display; we wondered where these lights were coming from. We were not even aware that these (wind) projects existed,” Mrs Wallecan told Le Monde. Three huge turbines are visible when gazing across the park from the bay windows in the chateau’s grand salon. “Every day we have to suffer the visual and noise pollution. I can see the turbines from everywhere in the castle, from every room,” said Mr Wallecan.

A panel of French judges saw their point:

Judges in Montpellier ruled that the turbines’ location blighted the countryside, causing the “total disfigurement of a bucolic and rustic landscape”. Besides the turbines “spoiling the view”, the judges also cited the “groaning and whistling” and “unsightliness of white and red flashing lights”.

The judges ordered the wind company, GDF Suez, to remove the turbines and pay damages to the Wallecans.  (GDF Suez has appealed.)

This being France, there is of course some backstory, and you won’t be surprised to learn that it involves hostage-taking.  OK, technically, the event seems to have been more a matter of besieging city hall.  It didn’t make news across the pond, but has been a rallying incident for the French wind-resistance movement.

According to this report from 20 October 2013, last year, the citizens of the tiny hamlet of Ferrières-Poussarou “took hostage,” for a night and a day, their local city hall.  (This brief update gives the date as 10 July 2012.)   Their demand: an explanation for the proposed addition of 90 new wind turbines to their pastoral mountain redoubt in the Hérault, in the south of France near the Mediterranean border with Spain (author translation):

“The wind blows according to the interests [of profit],” complain Stéphane Quiquerez and Benjamin Veyrac, creators of the citizens’ group of Ferrières-Poussarou. …

The mayor’s error: having taken [gentle] lambs for sheep.  “Meekness is like a wooden beam, the more obvious it is, the more wary you should be,” goes a local saying.  So last year, as one man, the village [of Ferrières-Poussarou] took its city hall hostage, for a night and a day, “to demand explanations.” Intervention by law enforcement, a media uproar, close monitoring by the national police… It [all became] a devil’s chorus that enabled these madmen to wangle a meeting with the sub-prefect [a local official above the mayor’s level], and to figure today in the debate.  Swelling like a flood with the proliferation of wind farms, the local dispute has [become the defining] experience of a decade.  And [it has a defining] leader: Marcel Caron.  A former college president, this retiree has overturned four projects in the region with his group Hurlevent, affiliated with the [larger] collective Vent de colère [Wind of Anger], which battles all the way to the Conseil d’État [France’s Council of State].

It bears noting, just because it’s so gallically charming, that the French call a wind farm a “parc éolien” – literally, Aeolian park – which is one of those linguistic delights that English, for all its adaptability, can never hope to offer.

But at this point, no one can be certain where the wind wars will all end.  One thing’s for sure:  the final chapter hasn’t been written yet.  Keep your eye on Europe. 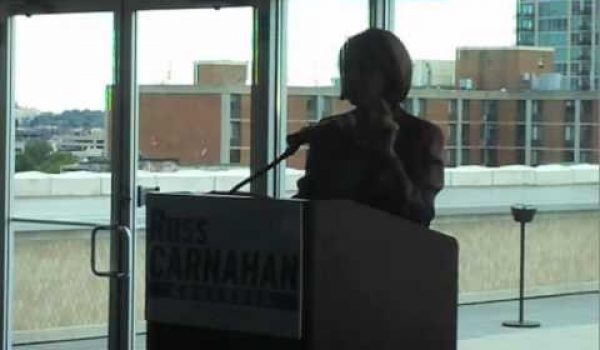 Add Pelosi to list of Dems who promised you could keep your health plan
Next Post
In the shadow of ObamaCare disaster, liberals take cheap shots at President Bush