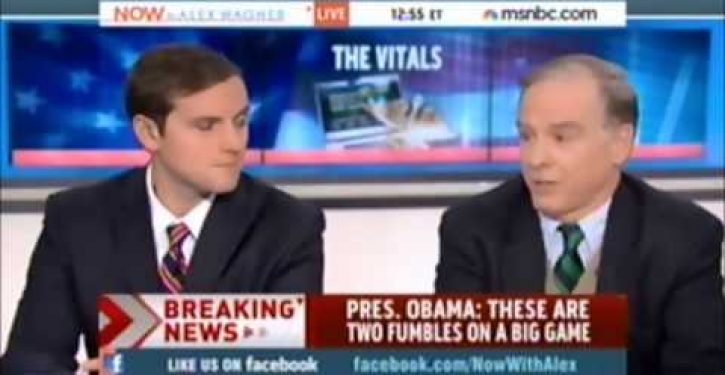 Give Barack Obama credit. A less headstrong, egotistical man would have shown some contrition today, having already consigned some 5 million Americans to the nightmarish fate of having their health insurance policies terminated with nothing to replace them — certainly nothing affordable.

But not Obama. He came out this morning with guns blazing, after initially delaying getting to the point of the presser by changing the subject to the relief effort in the Philippines.

Yeah, we get it, Mr. President, you’re a man of great compassion. But you’ve got a whole bunch of people on tenterhooks because of some ego trip you and your Democrat-controlled Congress took in 2010. And now they want answers.

But Obama has no answers, as becomes abundantly clear in the video that follows. Fast forward to 3:39, which is when he “switches gears,” as he puts it. After patting himself on the back for the successes “many” have enjoyed thanks to Obamacare, he gets to his proposed “fix”: People whose policies changed after passage of the ACA get a one-year grace period, during which they may retain their substandard policy (assuming they can get it back).

He also made it clear that he will sign no bill passed by Congress that delays or changes the benefit structure of the ACA because he refuses to send Americans back to the “broken” health care system they have endured up until he favored the nation with his countenance.

The Washington Post, which has a more upbeat recap of the news conference, notes:

[T]he administration will insist that insurance companies continuing to sell individual health policies that do not comply with those standards [mandated by the ACA] inform consumers about ‘what protections these renewed plans don’t include’ and alert their customers to potentially better and more affordable insurance available through the new federal and state marketplaces.

The administration insists? It and what army?

Changing the rules after health plans have already met the requirements of the law could destabilize the market and result in higher premiums for consumers. Premiums have already been set for next year based on an assumption of when consumers will be transitioning to the new marketplace. If now fewer younger and healthier people choose to purchase coverage in the exchange, premiums will increase and there will be fewer choices for consumers.

How bad are things for Obama? Even Howard Dean is scratching his head over whether Obama “has the legal authority to do this, since this was a congressional bill that set this up.”

The more important question of course is how bad it is for Americans. The answer is very.