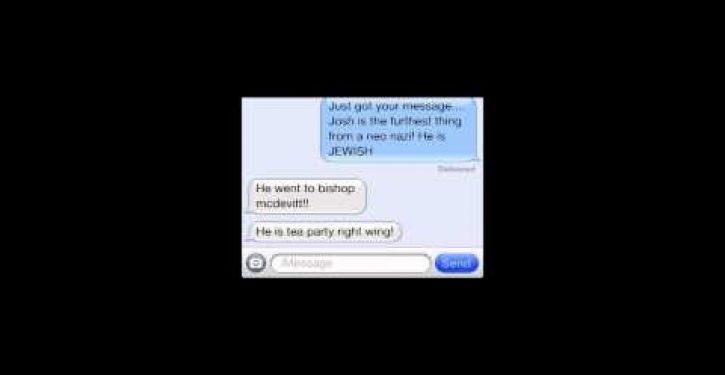 A teacher in the East Pennsboro School District, Cydnee Cohen, apologized for referring to a concerned parent as a “neo-Nazi” as reported by Rebecca Solomon of the local Fox News affiliate in Camp Hill, Pennsylvania today.

Parent Josh Barry voiced concern to his eighth grade daughter’s American History teacher after he saw a politically slanted worksheet that she brought home from school.

The assignment highlighted an article from the New York Times that blamed Republicans for the so-called “government shutdown.” The worksheet questions included, “Whom do you hold most responsible for the government shutdown?” and “Do you feel it is principled or irresponsible, for politicians to threaten a shutdown?”

The Examiner broke the story, which highlighted a voicemail left by Cohen (a teacher that Barry never met and was uninvolved in the assignment) to a mutual Facebook friend of Josh Barry’s. Cohen said in part,

“We’re having some problems with a parent in our school district and on his page you are one of his friends…but I would like to know, some of it seems like he is a neo-nazi…call me…”

When the friend heard the message, she texted to Cohen that Josh was the “furthest thing” from a neo-nazi (see screenshot).

Josh Barry is Jewish and his wife is half-black. He is not affiliated with the Tea Party, but does believe in limited government and fiscal responsibility. These days, that makes one an “extremist,” as reported by the Examiner.

Cohen was not convinced that Barry was not a “neo nazi” and texted back to the mutual friend that Barry went to a Catholic high school and is “tea party right wing!”

The local news reported quoted a statement by the school board,

“The District planned to meet with a parent who had a concern about a class assignment. A teacher that was not involved with the assignment took it upon themselves [sic] to address the issue that was made public by the parent on October 24, 2013. The teacher’s actions are not supported or sanctioned by the administration and school board of East Pennsboro Area School District. The District is looking further into this situation and will take appropriate actions.”

Additionally, Cohen herself apologized by saying,

“Recently I made a statement in a voicemail message to a friend regarding a matter involving another teacher in the East Pennsboro School District, in which I used some inappropriate language.

“I assumed my voicemail message was private, but private or not, it was inappropriate. I am very sorry that I used the words I did. I would like to personally apologize to the parent, which I plan to do.

“I also wish to apologize to the East Pennsboro community for my inappropriate language.”

Well, then. That makes everything all better.