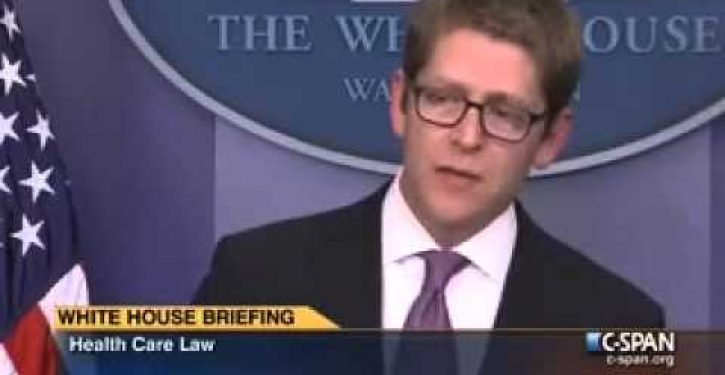 Now, Jay, was that so hard? Maybe next you could persuade your boss, Mr. Pouty, to come down here to the White House press room and repeat the message: “I was wrong when I said again and again (and again!) that if you liked your health care plan you’d be able to keep your health care plan.”

Baby steps, one supposes. It was still something of a coup that White House spokesman Jay Carney admitted at today’s briefing that “it’s true” that some Americans won’t be able to keep their health care plans thanks to Obamacare.

According to the Weekly Standard, the question whose answer has become increasingly and dismayingly obvious to Americans in recent days was asked by Fox New’s Ed Henry. Talk about adding insult to injury.

Here is a video of the exchange. The transcript follows.

ED HENRY: The president, when he was trying to get the law passed, repeatedly said, if you currently have health insurance you will be able to keep your plan. This morning David Axelrod was pressed on that point and said, the majority — the vast majority — will be able to keep their plans. He no longer works at the White House. From the podium, will you admit that when president said, if you have a plan, you’ll get to keep it, that that was not true?

JAY CARNEY: [After a solid minute of waffling] So it’s true there are existing health care plans on the individual market that do not meet those minimum standards and therefore do not qualify for the Affordable Care Act.

With the number of Americans who are likely to lose their existing policies estimated at 16 million, Axelrod’s assurances seem to fall short of warm and cuddly.

The next step is for the White House to concede that there are other major hurdles to the implementation of the health care law that make it unworkable in its present form — that painful though it will surely be, the presidents needs to acknowledge that the nation would be best served by scrapping the law and starting from scratch on a bipartisan basis.

The likelihood of that happening is infinitesimal because (1) the replacement law would conceivably be unready for prime time before Obama leaves office and (2) would result in his legacy consisting almost entirely of an aborted law.

By the same token, if he stands pat, he will need to face the wrath of his party, a senior consultant to which sent out an email on Sunday with the subject line “Dem Party is F**ked.” Ron Fournier of the National Journal was on the mailing list and reports part of the body of the email:

These middle-class consumers are staring at hefty increases on their insurance bills as the overhaul remakes the healthcare market. Their rates are rising in large part to help offset the higher costs of covering sicker, poorer people who have been shut out of the system for years.