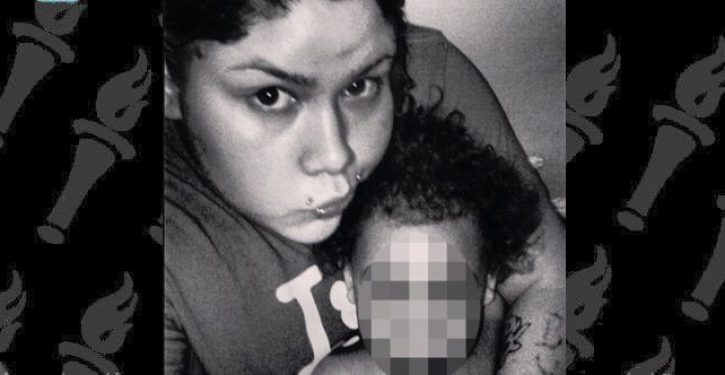 Women and children first! Wait, make that woman first! The kid will have to find his own escape route.

According to DNAinfo New York, a Manhattan mother (and I do mean “mother”) is under arrest for attempting to boost $250 worth of candy from a downtown health and beauty aids outlet on Oct. 7. But shoplifting is the most pardonable of 23-year-old Michelle Calderon sins. The least pardonable is her having bolted from the store, leaving her 1-year-old behind in his stroller after employees caught her red-handed.

Calderon stashed the pilfered goodies in the bottom of the baby’s pram, which she pressed into use as a battering ram and roadblock while she made her escape.

The young mother, who had been arrested in June for smuggling an cocaine into Rikers Island and was out on $50 cash bail, had help. Raymond Lebron, 20, was assigned to stealing cough drops and gum. Darnell Johnson, 26, served as a lookout inside the store.

In addition to the candy, the trio’s ill-gotten gains included $179 worth of Halls throat drops, $59 worth of Wrigley’s gum, $43 worth of Dentyne gum, and $15 worth of Tic Tacs.

A criminal complaint filed by the Manhattan District Attorney’s office charges all three defendants with attempted robbery. Lebron has also been charged with assault after striking a worker in the face, cutting the man’s chin and throat. Calderon is being charged with endangering the welfare of a minor and abandonment.

She is back at Rikers, but this time as a guest of the facility. She is being held against $15,000 bail.

The child was taken by the Administration for Children’s Services. An ACS investigation of the incident is ongoing.