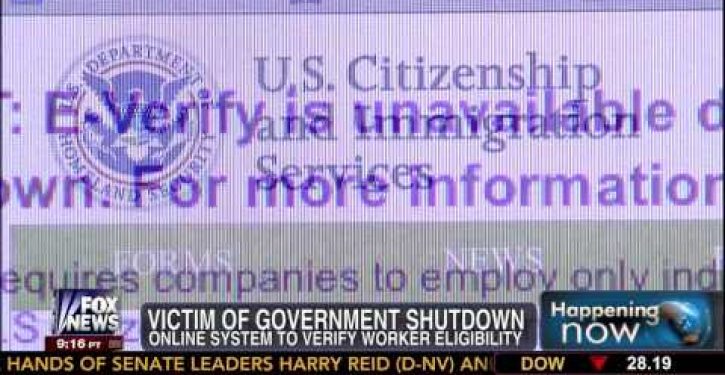 Jobs pushing elevator buttons for members of Congress are not the only casualties of the partial government shutdown, now in its 14th day. Among the federal services deemed “non-essential” is the E-Verify program. The Washington Free Beacon explains that the online “program that tells whether potential employees are here legally” is temporarily unavailable and is causing some problems for employers:

Since Oct. 1, many Americans have complained that those hired since that time have not been properly vetted. In the meantime, businesses will have to use an I-9 form that doesn’t provide thorough feedback over whether an applicant is here illegally.

U.S. Citizens and Immigrations Services declined comment about criticism of the program being shut down, and a human resources expert said right now employers cannot discriminate against people they are hiring….

The fact that the E-Verify system is “down” should surprise no one. Those on the right side of the ideological spectrum reckon immigration status differently from those on the left, including the administration. Recall that when sequestration went into effect in January, the Department of Homeland Security wasted no time furloughing 5,000 border control agents. It also directed supervisors with ICE to review the detainee population to ensure it was in line with available funding and to detained aliens from captivity if budgets were not met.

One can’t help but wonder whether this latest stunt is intended to inch the nation further to the administration dream of granting amnesty to all comers to these shores, legal and otherwise, while simultaneously sticking it to the Republicans in Congress in the hopes of forcing them to bend.

Previous Post
Redskins, Greenbacks and Obamacare blues on Columbus Day
Next Post
Is an anti-Sharpton rebellion brewing in Harlem?