Despite a House resolution demanding Defense Secretary Chuck Hagel allow contract and GS chaplains to minister during the shutdown, a sign on the chapel at the Naval Submarine Base, Kings Bay, Ga., made it clear that Catholic sailors would not be allowed to celebrate Mass on the base because of the partial government shutdown started by Senate Majority Leader Harry Reid’s refusal to consider GOP proposals to keep the government funded, the Daily Caller reported Tuesday.

“Shutdown: No Catholic service till further notice,” read a sign posted on the chapel door.

Father Ray Leonard, a Catholic priest who serves at the base, is not allowed to work because he has a contract with the Defense Department.

The Archdiocese for the Military Services, USA, has said that contract and GS priests like Leonard could face arrest if they attempt to minister to troops during the shutdown.

On Saturday, the House overwhelmingly passed a resolution demanding Hagel allow the priests to minister by a 400-1 vote. Only one Democrat — Rep. William Enyart of Illinois — voted against it.

Unfortunately, the Democratic-controlled Senate has refused to consider it, effectively shutting down services for hundreds of thousands of Catholics in uniform.

“My parishioners were upset,” Leonard said in a statement. “They were angry and dismayed. They couldn’t believe that in America they’d be denied access to Mass by the government.”

Rep. Tim Huelskamp, R-Kansas, had harsh words for the administration.

“Time and time again this Administration demonstrates it is waging a war against the very religious freedoms upon which America was founded,” he said. 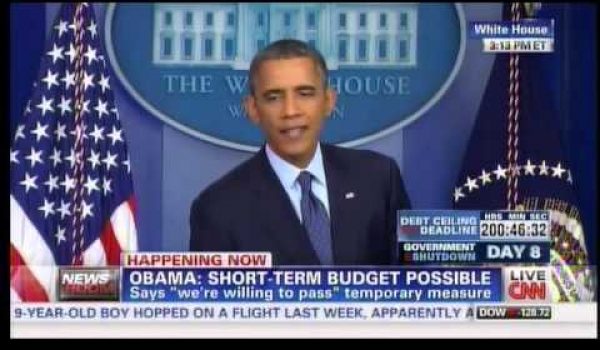 Obama’s nonsensical answer to why he won’t accept GOP’s piecemeal funding fixes during shutdown
Next Post
Whoops! Despite earlier reports House gym would be closed during shutdown, facility is open