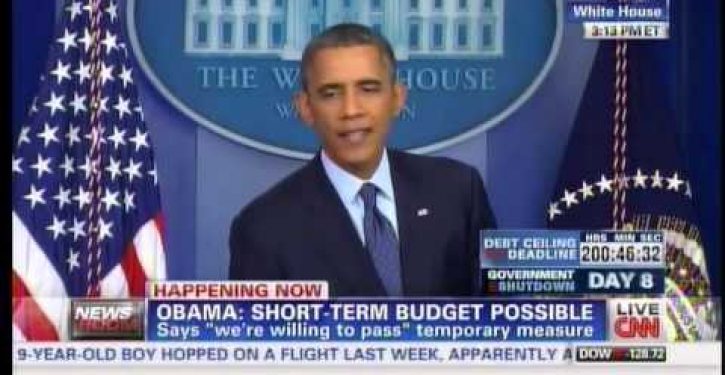 A Kinsley gaffe is a truthful statement told accidentally, usually by a politician. Members of the Obama White House have committed a number Kinsley gaffes over the years, and that includes the big man himself.

One of Obama’s most famous Kinsley gaffes was the one he allowed to slip before he was even president. It was his “bitter clinger” comment in April 2008.

Today, Obama gave rise to a whole new breed of mistake. At his press conference a reporter asked him this question:

Mr. President, while you’re waiting for the shutdown to end, why is it that you can’t go along with any of the bills the House is passing funding the FDA, and FEMA where you were yesterday, and veterans benefits, and HEAD Start? You’ve got to be tempted to sign those bills and get funding for those programs that you support?

You need to watch and listen to Obama’s answer.

A transcription of the money quote follows:

What you’ve seen are bills that come up where, wherever Republicans are feeling pressure political pressure, they put a bill forward. And if there’s no political heat, no television story on it, then nothing happens.

The gaffe — which I propose calling the “Obama gaffe” — is the logical opposite of the Kinsley gaffe. It is to make a false statement that accidentally provides a window into your own actions. The GOP-led House has passed eleven pieces of legislation since the shutdown began on Oct. 1. Almost none of them were reported by the mainstream until they first mentioned by a member of the administration or a Congressional Democrat.

A key example is the H.J. Res. 73, aka, the Research for Lifesaving Cures Act, which would enable the NIH to continue to seek lifesaving innovations and cancer research. It is doubtful that anyone would have heard much about this measure had it not been for Harry Reid’s callous response to a question from a CNN reporter about saving the life of a single child with cancer.

In accusing the Republicans of playing politics with these measures, Obama was really describing the raison d’être for his press conference. It was a political necessity in response to negative fallout he has received from his foolish closure of parks and monuments — a cynical move that was designed in the first place to embarrass Republicans.