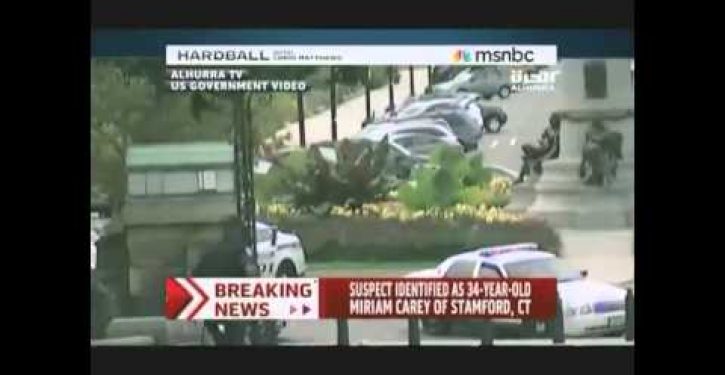 MSNBC resident loon Chris Matthews out-tingled himself last night when he sought to draw connective tissue between the wild car chase through the streets of D.C. yesterday afternoon with “GOP hatred of the President’s Affordable Care Act.”

The story that played out on Thursday was tragic. But it was also straightforward: There were no dots to connect, no hidden agenda or underlying message in the crazed rampage that distracted news watchers for an hour or two from more pressing matters of the day.

From all accounts, the Capitol Police, despite working without pay as a result of the partial government shutdown, performed brilliantly. Early speculation that the driver of the speeding car had a history of mental illness was confirmed by the time Matthews took his place on the set of “Hardball.” And although she has since been described as a doting mother of the infant child she now leaves behind, 34-year-old Miriam Carey gave members of law enforcement no choice but to fire upon her.

The story ends there — unless you have the vivid imagination of a Chris Matthews. A video clip of his “analysis” of the chase and its broader implications follows:

But let me start tonight with this, the government shutdown was shattered just hours ago by the death of a woman who just minutes before that had crashed her car into the White House gate.

A city already tensed up with a compound of unpaid salaries, required essential services, and an uncertain future was shaken by the crash at the White House gate. A televised car chase, the violent death of a woman driver, a young child in that vehicle witnessing the horrible end.

The death will no doubt become an iconic tragedy in this period of government shutdown driven by the hatred of the President’s Affordable Care Act and the compulsion of his critics on the hard right to punish him politically. [Emphasis added]

It is ironic to hear someone like Matthews speak of hate, since the opposite emotion — a serious case of puppy love — has grossly distorted his perception of reality, prompting to ask, for example, on a previous occasion when Obama was “going to credit for amazing economy.”