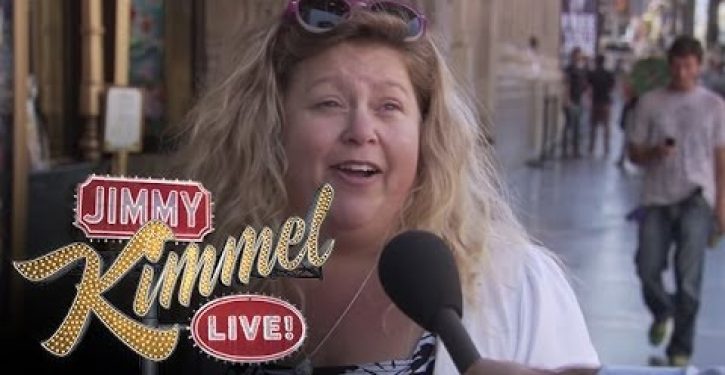 I’m not sure which polls late-night TV host Jimmy Kimmel is citing in his prefatory remarks, which include the claim that “Americans don’t like Obamacare but love what’s in it.” Nevertheless, his man-on-the-street interviews paint a sobering picture of Americans’ ignorance when it comes to the president’s signature health care reform law — the bone of contention that led to the current government shutdown. In fairness, the experiment is an indictment as well of the law’s complexity: In its original incarnation it was 2,700 pages long.

In the video, passersby are asked which plan they support, Obamacare or the Affordable Care Act. The first respondent is typical. She says of Obamacare:

I just think there’s a lot of holes in it and that it needs to be revamped. I just think it hasn’t been thought out.

The studio audience chuckles as this woman and others struggle to explain the difference between the “competing laws” and their predilections, but a CNBC poll from last week suggests it’s no laughing matter. Of those queried, 46% said they were opposed to Obamacare, while only 37% said they opposed the Affordable Care Act.

Another poll, jointly conducted by the Kaiser Family Foundation and NBC, found that 51% of Americans who are currently insured said they didn’t have enough information about the law to understand how it would impact them and their families. When the same question was posed to those currently uninsured, the percentage jumped up to 67. The poll also found that 74% of uninsured Americans had no idea when the state health insurance exchanges were scheduled to open.

So much for the president’s repeated efforts to educate the public on the benefits of the law through countless speeches and PR pushes.