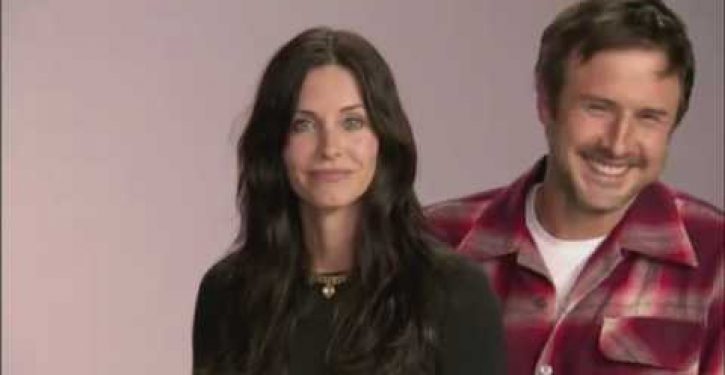 Is it possible to unwatch a video? The Hudson (Wisc.) School District certainly hopes so. It has even issued an apology for showing its middle school students a video titled “I Pledge” as part of Peace One Day on Wednesday, Sept. 25. The damage, however, is done.

In the video [see below], Red Hot Chili Peppers lead singer Anthony Kiedis says, ‘I pledge to be of service to Barack Obama,’ and Demi Moore finishes by saying, ‘I pledge to be a servant to our president.’ [Emphasis added]

The school’s principal, Dan Koch (yes, Koch, the same name as the evil brothers who support the even more evil Republican Party) made the following announcement to students Thursday afternoon:

The ‘I Pledge’ video we viewed yesterday included some messages about serving President Barack Obama. We apologize for any part of the video that was offensive to students, their families and staff. The video conveyed a message that people serve the presidency when in fact our elected officials serve the people. We respect the Office of the President of the United States but like all of our other elected officials, that office [sic] serves each of us as well. I sincerely hope that as participants in Wednesday’s event what you took away from the experience was to choose to make a difference in your world.

The district has since released a lengthier mea culpa that reads in part:

On Wednesday, September 25th, Hudson Middle School recognized Peace One Day, an international event to build peace awareness. The Middle School has been participating in this event since 2009. According to Peace One Day organizers, the event has been recognized across the world by 280 million people in 198 countries.

The purpose of this event is to encourage Middle School students to make a difference in their world locally, nationally and globally; and to respect oneself, family, friends, community and the environment.

Student activities included viewing a brief Peace One Day video; introduction of school peace photo and poster contest; viewing the ‘I Pledge’ video; an opportunity to make individual pledges to ‘speak in a kind way, help others throughout the day, care for our earth and respect people in every land;’ and concluded with an annual school photo of students in the formation of a musical note exemplifying peace and harmony.

The Middle School and District apologize for the use of the ‘I Pledge’ video. The reason the video was used was to show students small ways to make a difference in their communities. Most of the video provided viewers with examples like: end hunger in America; volunteer more; always represent your country with pride, dignity and honesty; and care for America’s elderly. Unfortunately, the video also had a political slant. The District is non-partisan and does not endorse the political messages found in this video. This video will not be used in the District again.

But as long as the district continues its observance of Peace One Day, the message will endure. The stated purpose of the day — begun in 1999 as “an annual day of global unity, a day of intercultural cooperation on a scale that humanity has never known” — is an embodiment of the liberal credo. It hews to the misguided belief that peace and harmony are attainable by a unilateral willingness to wish them so.

In this sense, the video chosen this year is the perfect anthem, paying homage to the man who officially announced to the world on May 23 of this year that the Global War on Terror was over. The announcement came interestingly within days of the testimony by then-Secretary of State Hillary Clinton before a House Oversight Committee in which she famously declared, with more than a hint of exasperation:

Was [the attack on the U.S. Consulate in Benghazi] because of a protest or was it because of guys out for a walk one night and decided they’d go kill some Americans? What difference — at this point, what difference does it make?

Clinton went to elucidate her seemingly callous comment by adding that it was “less important today looking backwards as to why these militants decided they did it than to find them and bring them to justice.” A period of nearly five months has passed since then, and the State Department, which has a new leader, is no closer to bringing the responsible parties to justice. If anything, the administration is eager, as it has ever been, to put the ugly incident behind it so that it could move on to its mission of ensuring “global unity” and “intercultural cooperation.”

In the meantime, a bomb was detonated outside the Foreign Ministry building in Benghazi on Sept. 11, 2013 and two days later, the U.S. Consulate in the Afghanistan city of Herat was attacked by Islamic militants.

What difference at this point, etc.