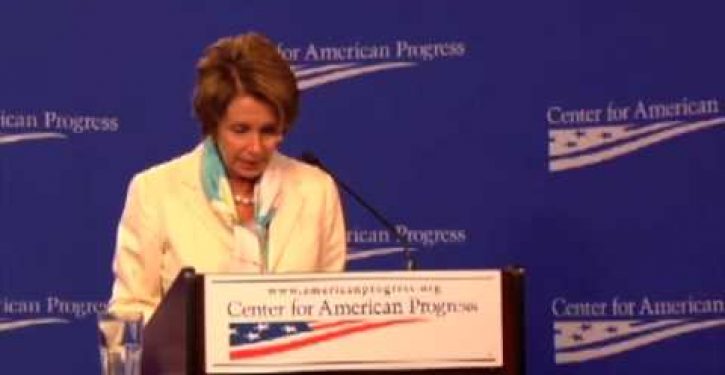 Hey, it could happen to anyone. Both documents are really old. Besides, they were written entirely by white males. I suppose one should be grateful that House Democratic leader Nancy Pelosi deigned to refer back to either one.

The occasion on which the woman was once two heartbeats away from the presidency confused the two most important documents written by the nation’s founding fathers was a speech last Wednesday at the Center for American Progress (CAP).

Pelosi was recalling the women’s rights convention at Seneca Falls , in 1848. It was a time when women were still not permitted to speak in public. Judging from Pelosi’s performance at the podium on Wednesday, obviously not all women should.

Jeryl Bier of The Weekly Standard offers up a video capture of Pelosi “stumbling over her words and flipping through her notes.” A transcript follows:

And so, it was 165 years ago, 165 years ago. Imagine the courage it took for those women to go to Seneca Falls and do what they did there, to even leave home without their husband’s permission, or father’s, or whoever it was. To go to Seneca Falls, and to paraphrase what our founders said in the Constitution of the United States: they said the truths that are self-evident, that every man and woman, that men and women were created equal and that we must go forward in recognition of that. [Emphasis added]

But as Bier points out, it is the Declaration of Independence — not the Constitution — that carries the language Pelosi was referring to.

Pelosi’s website includes a transcript of the remarks in which a clumsy attempt at glossing over the error is made. The word Constitution is replaced with the phrase Declaration of Independence shown in square brackets:

To go to Seneca Falls, and to paraphrase what our founders said in the [Declaration of Independence] of the United States….

But that is as dishonest as it is wrong. Modern Internet protocol calls for the use of the strikeover (e.g., ) to show revisions, a function available in most web editors.

Previous Post
No, OCR’s demand that colleges weaken the presumption of innocence is not entitled to deference
Next Post
GOP hasn’t the votes to defund, nor Obama to fund, Obamacare