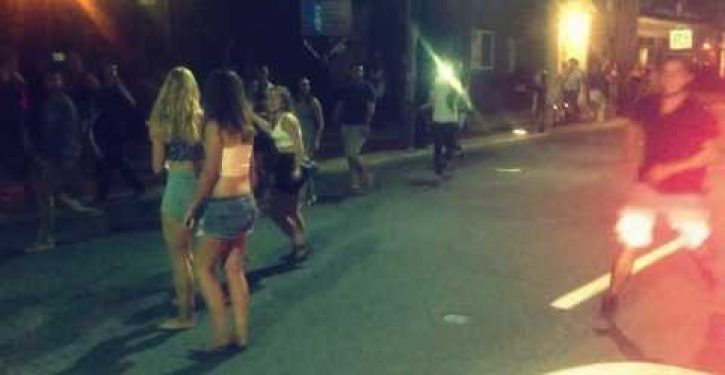 In Newark, Del., Monday night, police disbursed more than 3,000 rowdy teenagers who were just blowing off some steam at a “Shmacked Tour” party event.

According to Newark radio station WDEL:

More than 1,000 people were partying in the backyard of a house, where a DJ was spinning.

When police arrived, the crowd broke up, blocking traffic on South College Avenue and Main Street. Police say many of the students walked on the hoods of cars.

After the party broke up, the crowd — mostly of students from the University of Delaware — swelled to 3000, say police. Local media called it a “riot.”

No bricks through storefronts.

No bottles thrown at cops.

No one in the hospital.

No locks in socks.

No baseball bats in the face.

No pushing people into moving cars on a busy street.

Just one measly car fire. And a couple of people jumped on cars.

There was some public urination. And a few guys dropped their drawers, displaying their tighty whities. Other than that, a few parents wondered what videos of their children acting stupidly were doing up on the internet.

You call that a riot?

The Shmacked Tour is organized by a video company that goes from college town to college town, filming college kids in their natural environment. The charge $20 to $75 a ticket. Think lots of beer and scantily clad college girls. Kind of a “Girls Go Wild” lite. The videos of the parties attract hundreds of thousands of viewers.

The company also sells t-shirts and other accessories.

On the bright side, they did have some pretty good excuses. The founder of the roving frat bash, Arya Toufania, explained it all to the Daily News after he learned his cameraman was one of three people arrested at the “riot.”

“The real instigators of the riot were the police. They could have shut the party down, cornered it off, it just seemed as if they were, like, monitoring the riot.”

At least they got that part right. The excuses, that is.

Meanwhile, the same night a few miles up the freeway in Chester, Pennsylvania, 100 black people were fighting in the street. Ten people were arrested. No one called that a riot. They called it a large fight.

When Philly.com tracked down Chester Police Commissioner Joseph Bail Jr. to ask about that riot, he put it all in perspective: