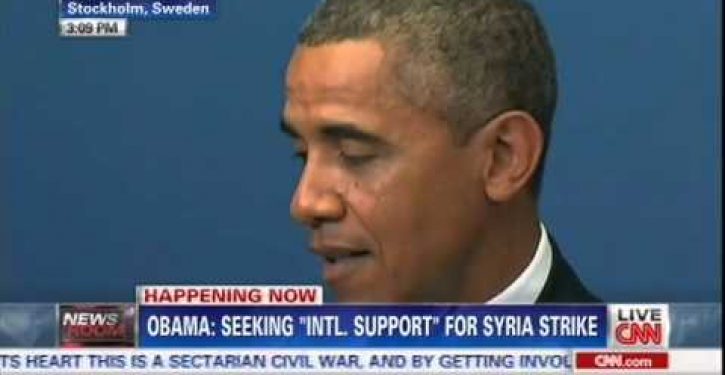 The first cruise missile has yet to fly in the event of a U.S. strike on Syria, and already the president is seeking to pass the buck for painting himself into a corner a year ago and now feeling impelled to make good on the ultimatum he issued. So eager is he to shirk responsibility (once again) that he is attempting to rewrite history.

In a news conference in Sweden this morning he denied threatening to use force against Syria if the Assad regime used chemical weapons on its civilian population.

The Right Scoop provides both video of Obama’s exchange with a reporter and the transcript, both of which follow:

As for his claim that he “didn’t set a red line” for Syria, that is belied by his own words a year earlier. The money portion of the president’s statement begins at 0:32 in the clip that follows. Here is the transcript:

We have been very clear to the Assad regime, but also to other players on the ground, that a red line for us is we start seeing a whole bunch of chemical weapons moving around or being utilized. [Emphasis added]

It is possible that by us, Obama was referring to the world, though the context doesn’t support it.

5 reasons why a Trump 2016 run could be good news for GOP
Next Post
Rep. Joe Wilson asks, ‘Where do the chemical weapons come from?’