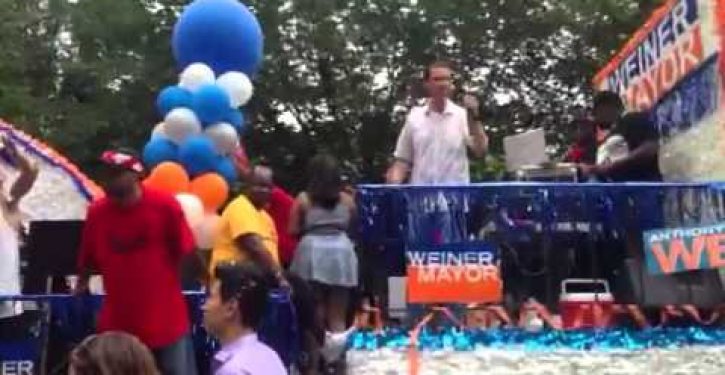 How low can he go? The “he” in the previous sentence refers to delusional New York mayoral hopeful Anthony Weiner (aka, Carlos Danger). But the phrase — borrowed from the traditional Trinidadian dance, the limbo — does not hark back to the dance contests that were a craze in the U.S. during the 1970s.

Instead it refers to an appearance that Weiner made at yesterday’s West Indian Day Parade in Brooklyn, in which he affected a Caribbean accent. According to New York’s Daily News, Carlos “boogied atop the confetti-covered float and called out to paradegoers in a fake Caribbean accent:

The spectacle was captured on video:

You’d think that Weiner would have learned something from his interview in early August with a reporter from Britain’s ITV Daybreak, whose English accent the candidate mimicked. The reporter was not amused.

Weiner, who has been bringing up the rear in the mayoral race ever since his sexting scandal gained a second wind in July, has promised in televised ads to replace New York’s free-market health care system with a single payer plan. Adding another layer of bureaucracy, he claims, will deter further hospital closures — an ongoing problem in the Big Apple. Fortunately, New Yorkers have pretty much ruled out the possibility of a Mayor Weiner (who is polling in the single digits) and won’t have to find out firsthand how devastating that proposal would play out.

In a separate policy note, the Daily News observes, “Team Weiner later Monday argued that civilians or retired cops, not on-duty NYPD officers, should be tasked with setting up and dismantling those endless barriers along parade routes.”