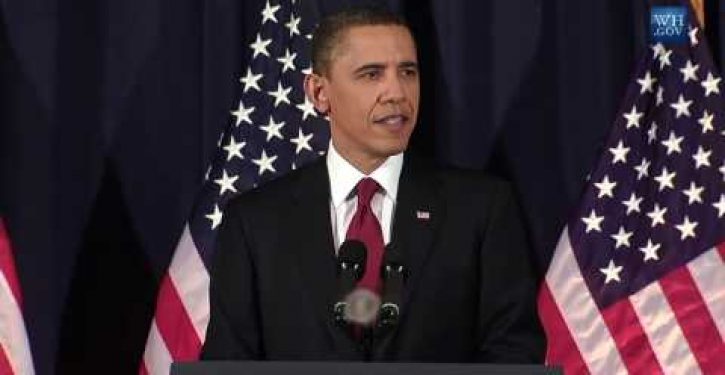 Barack Obama plays the leader of the free world on TV, but in real life he’s a duffer on whatever golf course is closest. But a country can pretend, and the U.S. has made believe for the past four years. The media have played along, inventing presidential-sounding terms like “the Obama Doctrine,” which in the real world is so vague that even Wikipedia defines it as “not a specific foreign policy introduced by the executive, but rather a phrase used to describe Obama’s general style of foreign policy.”

To get some sense of how amorphous the Obama Doctrine is, don’t just look back one year to Obama’s imposition of a line in the sand for Syria that, once crossed, would lead to “enormous consequences” (whatever that means). Look back a little further, to his speech in 2011, explaining his intervention in Libya. A video of the remarks follow for those with the stomach to suffer through 26 and a half minutes of Obamaspeak.

For those with weaker constitutions, I offer a couple of key excerpts:

At this point, the United States and the world faced a choice. Qaddafi declared he would show ‘no mercy’ to his own people. He compared them to rats, and threatened to go door to door to inflict punishment. In the past, we have seen him hang civilians in the streets, and kill over a thousand people in a single day. Now we saw regime forces on the outskirts of the city. We knew that if we wanted — if we waited one more day, Benghazi, a city nearly the size of Charlotte, could suffer a massacre that would have reverberated across the region and stained the conscience of the world….

It’s true that America cannot use our [sic] military wherever repression occurs. And given the costs and risks of intervention, we must always measure our interests against the need for action. But that cannot be an argument for never acting on behalf of what’s right. In this particular country — Libya — at this particular moment, we were faced with the prospect of violence on a horrific scale. We had a unique ability to stop that violence: an international mandate for action, a broad coalition prepared to join us, the support of Arab countries, and a plea for help from the Libyan people themselves. We also had the ability to stop Qaddafi’s forces in their tracks without putting American troops on the ground.

OK, that seems pretty clear. But by that calculus, shouldn’t the U.S. have intervened in some fashion after the Syrian regime called Obama’s bluff this past week when the rogue nation perpetrated a “massacre that reverberated across the region and stained the conscience of the world”? Obviously not.

Despite reports that as many as1,300 civilians were killed with nerve gas, the White House is hardly springing into the fray. On Wednesday, Obama front man Josh Earnest, “We are calling for” a “U.N. investigation to be conducted.” Ooooh, take that, Bashar al-Assad!

Back in June, before the recent conscience-staining massacre, the Obama administration was arguing that the same criteria outlined in his Libya speech didn’t apply in Syria. Never mind that by that estimates of the number of casualties since the uprising in Damascus began ran as high as 13,000. The use of force was not required because there was no overt threat of slaughter there to compare with Gaddafi’s. The fact that Syria had more sophisticated military forces and air defenses than Libya was supposedly not a factor.

Neither, one supposes, is the American people’s weariness over U.S. involvement in skirmishes in the Middle East. Which leaves Obama typically on the fence. If he puts American boots on the ground, he will endanger his second-term agenda. If he does nothing, he will be called a wimp and challenged by other bad players on the world stage.

So instead, he is hiding behind statements by anonymous members of his national security team (with whom he met today) that are supposed to sound decisive but come off as empty rhetoric:

Once we ascertain the facts, the president will make an informed decision about how to respond. We have a range of options available, and we are going to act very deliberately so that we’re making decisions consistent with our national interest as well as our assessment of what can advance our objectives in Syria. [Emphasis added]

How’s that narrative work for you, Mr. President? 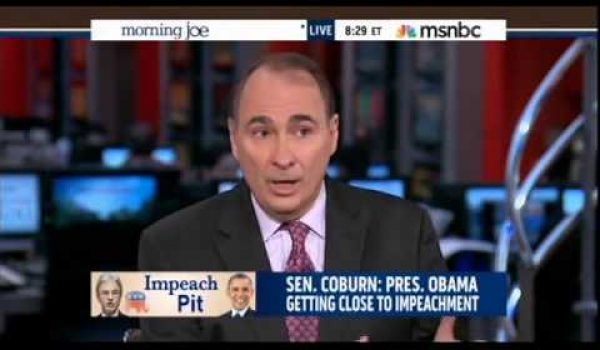