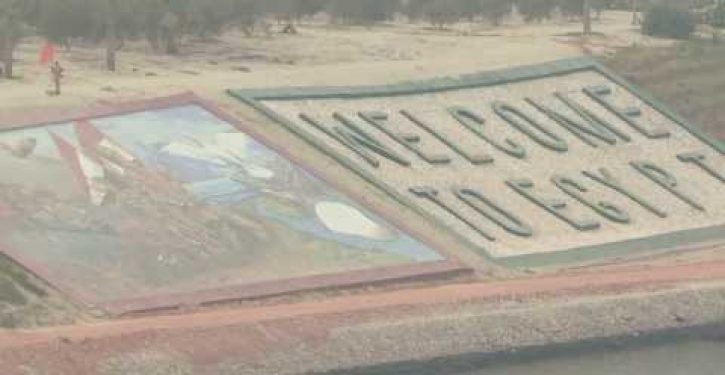 It being the silly season in Washington, there had to be a rumor of war.  Well, a rumor of a cruise missile strike.  Well, OK, a rumor that U.S. Navy warships were ordered to “close their ranges” with Syria in case Obama gets permission from the UN to mount an attack, if there’s clear evidence that the Syrian regime gassed its people.

That last point is actually an exact characterization of Obama’s posture, which he expressed in the interview with CNN aired on Friday:

“There are rules of international law,” he told CNN’s Chris Cuomo. “If the U.S. goes in and attacks another country without a U.N. mandate and without clear evidence that can be presented, then there are questions in terms of whether international law supports it, do we have the coalition to make it work, and, you know, those are considerations that we have to take into account.”

So cool your jets, people.  All we’re doing right now is talking about naval force.  Suddenly we’re talking about it a lot, but it’s not clear there’s any big point to it.

A few discussion items.  One, the deepest point of Syria is about 380 statute miles (600km) from the coast, but almost everything we might want to attack, to affect the Assad regime’s prosecution of the war, is less than 100 miles (160km) from the coast.  The Tomahawk cruise missile, in the variant likely to be used (TLAM-C Block III), has a range of 1000 statute miles (1,600km).  The less-likely TLAM-D has a range of 800 statute miles (1,250km).  So U.S. Navy warships don’t have to get closer to Syria than the open waters of the central or east-central Mediterranean Sea.

This, in turn, means that no public explanations would ever be necessary – our warships are often in the central Mediterranean – and that the explanations are therefore being given, as verbosely as possible, for a reason.  Presumably, it is to highlight, with fanfare, the fact that Obama is contemplating using cruise missiles against Assad.  And that, presumably, is meant to warn and/or deter Assad.

Assuming Assad has the means to view clips from the CNN interview, or read transcripts like the bit from Politico excerpted above, he will of course be clear that action by Obama is contingent on permission from the UN.  (If his power blinks out, the Iranians or Russians can keep him updated on matters of this kind.)  Assad has good reason to assume Obama won’t get that permission.  Russia and China have blocked UN Security Council resolutions against Syria on multiple occasions, and continue to defang or veto them.

Of course, making transparently worthless threats to long-time despots has been a pattern with Team Obama.

I’m skeptical that we have any intention of taking action against Syria – even punitive action, with no view to an outcome or end-state.  Maybe Team Obama imagines itself to be in a “dialogue” with Assad; i.e., the ball is now in Assad’s court, to send some signal that he’d rather not be hit with cruise missiles, and maybe we can work something out here.

Or perhaps the verbal gambit is intended for Russia, which has way more warships sitting off Syria’s coast than we do.  (Note: from the count at the unofficial Turkish Navy website, Bosphorus Naval News, it appears that there are currently 5-6 Russian navy ships in or near Syria, with one of those being an intelligence collector.)   Hey, Russkiy dudes, we might just think even harder about hitting your boy, if you don’t take some order to him.  Don’t make us escalate this gradually.

That would be the 1960s-era, Robert S. McNamara/Brain Trust frame of reference.  All we need is some evidence-of-our-determination patrols off the coast by intelligence ships – if we still had any – to complete the retro picture.

But there is every possibility I’m overthinking this, and the only thing that’s going on is that the Obama administration is making tough-sounding noises to get the media off its back about Syria.

In other naval notes:

1.  USS Harry S Truman (CVN-75), which finally deployed from Norfolk in July, nearly six months after her originally scheduled departure date, has been in the Central Command area of responsibility since 18 August, when she went through the Suez Canal (video).  So there is no carrier or carrier air wing positioning itself off Syria.  Speculation about using Truman in a strike on Syria is invalid.

2.  You might well have been unaware, given the lack of coverage in the mainstream media, that a Russian naval task force arrived in Cuba on 5 August, marking the first such visit in four years.  The lead warship is the Slava-class cruiser Moskva, accompanied by the Udaloy-class destroyer Vice Admiral Kulakov and an oiler, Ivan Bubnov.  The Moskva task force went to Nicaragua next, where it arrived 12 August for the first-ever visit of a Russian (or Soviet) naval ship to the Central American country.

Moskva is scheduled to visit Venezuela on this deployment as well, and will conduct joint operations with the Venezuelan navy.

3.  China’s navy continues to bolster an active profile in the Pacific, having completed a provocative circumnavigation of Japan in early August.  Circumnavigating Japan is something you do only for its own sake; it doesn’t take you anywhere.  A foreign research ship might have maritime science interests, but when a foreign navy does it, it’s just a provocation.

China also wasn’t getting enough attention in Washington for her naval intelligence collection against Hawaii and Guam, so one of her naval officers announced it baldly at a maritime conference in early June 2013.  The Washington Times spoke with a U.S. analyst who confirmed that Chinese naval ships have entered the U.S. exclusive economic zones off Hawaii and Guam.

Chinese aggression in the South China Sea has the Philippines arming up – and Japan, under geopol-activist Prime Minister Shinzo Abe, stepping in to offer help.  All worms turn eventually.

The launch of Japan’s biggest new warship, a helicopter-carrying big-deck, in early August, did get plenty of attention from the MSM.