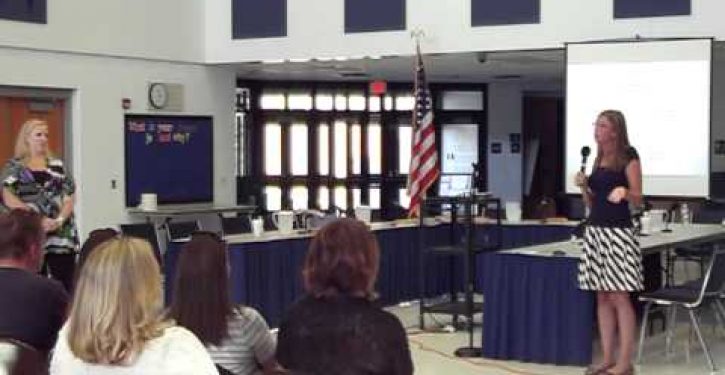 As a one-time teacher and former dabbler in educational (el-hi) publishing, I am a strict adherent to the view that the government should butt out of education. Our cash-strapped nation could save a boatload of money by shutting down the U.S. Department of Education and converting its headquarters on Maryland Avenue in D.C. to luxury condos.

That being said, a column today by Michael Schaus at Townhall.com makes assertions about the Common-Core State Standards that I feel impelled to take issue with.

Like all educational initiatives, Common-Core has drawn flak, from left as well as right. Both the liberal Brookings Institute and the libertarian Cato Institute have  criticized the program. Conservative governors, including South Carolina’s Nikki Haley, have assailed the program as a federal “top-down” takeover of state and local education system. They are right.

But their objection is to the manner in which the program is administered, not to the methodology that underlies it. Common-Core aspires to theoretical benchmarks that are above reproach. Schaus doesn’t seem to understand that. He writes:

Apparently, under the new Common-Core standards, correct answers don’t really matter. At least that’s according to a ‘curriculum coordinator’ in Chicago named Amanda August. ‘Even if [a student] said, ’3 x 4 was 11,’ if they were able to explain their reasoning and explain how they came up with their answer really in, umm, words and oral explanation, and they showed it in the picture but they just got the final number wrong, we’re really more focused on the how,’ said the common core supporter and typical liberal, Amanda.

For readers who don’t yet share Schaus’s outrage over what he calls a “typical liberal” formulation, he provides a video of August giving utterance to these views, which I’ve copied below.

Schaus continues after the video:

The left has long sought to bolster self-esteem by downplaying wrong answers in education. Everyone gets a ribbon; a truly disastrous lesson to teach when not everyone is capable of getting a job. And while the how is important in any lesson plan, in the end, the answer should still be correct.

Schaus is right that in the end that the answer should be correct. This is something that the teacher in this video addresses, as Schaus acknowledges.

He is also right about the insidiousness of “participation trophies” and of the left’s kneejerk need to bolster self-esteem in cases where tough love would be the more utilitarian prescription. But the example he provides is not one of those cases.

The one saving grace of the ill-fated new math of the 1970s was its emphasis on method over mere results and of broadening students’ horizons by teaching numeration systems other than the base 10. It is perhaps no accident that the pioneers of the modern personal computer — which, like all computers, relies on the binary (base 2) system — were educated by and large at a time when the new math was still being taught.

Two longstanding weaknesses in education in this country have been a failure to teach scientific method and giving only lip service to critical thinking skills. If the president had learned scientific method — or “hypothesis testing” — he would know how silly he sounds when he speaks of a scientific “consensus.” Real science is not a popularity contest. Experiments are carried out and evaluated under rigorous conditions without appeal to passion or politics.

Critical learning, similarly, focuses more on method than on outcome. A child who can correctly use a cognitive process is far better off than a child who arrives at the right answer through guesswork, even if the first child commits a computational error and arrives ultimately at the wrong answer. That is what Amanda August is promulgating in the video above. Her Common-Core methods are sound, whether Michael Schaus understand that or not.