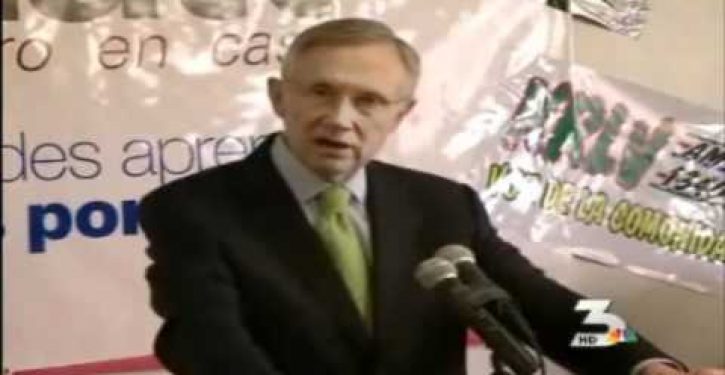 For those who hadn’t noticed, Liberty Unyielding launched a Twitter feed about a week ago. Its purpose is to provide readers with yet another source of current events and a broader spectrum of political views. You can find the feed in the right-hand column below the fold.

I mention this new feature only partly out of shameless self-promotion. It actually has relevance to the present column insofar as one of the people LU follows is conservative talk radio host and TV personality Larry Elder (who follows us back — just saying). One thing I have noticed in reading Elder’s tweets is that the majority of them trade on the topic of race. For example, yesterday he tweeted a link to the video below, in which Senate Majority Leader Harry Reid states without blinking, “I don’t know how anyone of Hispanic heritage could be a Republican.”

On Saturday, the “Sage of South Central,” Elder’s self-style nickname, engaged in a “conversation” (more of a shootout actually) with a fellow black who accused him of being a “Tom.” Urban Dictionary offers up seven definitions of “Uncle Tom” (from which “Tom” is derived), some of them reflective of the meaning intended by Elder’s interlocutor — i.e., a black who sells out to the white man.

Elder’s accuser was unable to articulate what made him a Tom other than the fact of his skin color and conservatism, but that hardly distinguishes her from any liberal in the country who falls back on this pejorative term when all logic fails. This catch-22 for black conservatives reared its ugly head most recently in Herman Cain’s bid for the Republican nomination in the run-up to the 2012 presidential election. When Cain shared his view with CNN’s Wolf Blitzer that black Americans had “been brainwashed into not being open-minded” and to voting for Democrats, the floodgates of self-righteous indignation opened.

The Atlanta Post, which describes itself as “the #1 news source for African-American business news and African-American politics,” bumped Cain’s brainwashing remark up to first place in its compendium of his “seven most outrageous statements.” (The post maintained no such list for Barack Obama or any other candidate.) Talk show host Tavis Smiley was not merely incensed but incredulous, asking, “How does he get away with saying this to black folk?”

The most self-revealing comment came from David Bositis, senior political analyst at the Joint Center for Political and Economic Studies, an organization dedicated to improving the socioeconomic status of blacks. Bositis was quoted in The Christian Post as saying that Cain “is not somebody that is knowledgeable about African-Americans as a whole. He’s an individual.”

Bositis meant the highlighted part of the quote to imply that Cain speaks only for himself (unlike Bositis, also an individual, who presumes to speak for all blacks).

But that notion of rugged individualism among blacks is the biggest threat to the liberal-left worldview. Democrats are fond of citing examples of individual blacks who have achieved wealth, fame, or glory but only to mollify the black masses who continue to struggle, largely because of well-meaning but toxic government entitlement programs that frustrate personal ambition. The mainstream media, one of the most flagrant offenders, will go out of its way to distort stories in which blacks are gunned down by whites or the police in order to stoke the victimist group mentality that keeps blacks down — and conveniently in the pocket of Democratic politicians.

I conclude with a YouTube video that arrived at LU in the comments section. Its sender is a Tom — literally. His name is Tommie Scott, and he hails from Larry Elder’s neck of the woods. He writes in his comment:

I’m a black Christian & ex gang member from Los Angeles now staying in Las Vegas. I lost 30 friends by the hands of my own people.

Tommie is quite obviously capable of thinking for himself. If his words ever reach the ears of the liberal establishment, will they resonate? Or will the left do what it has done historically with people like Tommie and cry “Uncle.”