It didn’t take as long as I thought for the details to come out about the settlement between the state of Indiana, the Indiana State Teachers Association and the National Education Association over the financial collapse of the union’s insurance trust. The state sued ISTA and NEA, claiming more than $27 million was owed to participating school districts after the trust went under due to bad, high-risk investments.

Under the terms of the settlement, NEA and ISTA will pay $14 million to the state within 10 days of all 27 school districts involved agreeing to the terms. Which union owes what was not disclosed, but it is academic since the Indiana affiliate is millions of dollars in the red and still effectively under NEA administratorship. The immediate payment will have to come from NEA’s national coffers, which means teachers all across the country are on the hook again to bail out ISTA.

“ISTA was blatantly covering up their Ponzi-like scheme through falsified account statements,” said Indiana Secretary of State Connie Lawson. “Repeatedly doctoring account statements to create the illusion that investment funds exist after they’ve been misappropriated is shameful. I hope this case will serve as a warning to others who think they can take advantage of their investors and as a reminder to investors to keep a vigilant eye on their investments. I further believe that ISTA and the NEA have the moral obligation to repay the full amount of losses suffered by these schools.”

Don’t hold your breath for that, Secretary Lawson.

On the plus side for NEA, the settlement levies no fines or legal fee reimbursement upon the union. NEA also ends up paying 52 cents on the dollar. The $14 million payout may end up being a bargain considering how bad it could have been.

The secretary of state’s office provided a timeline of events leading to the settlement, although this Indianapolis Business Journal recap covers more of the essentials. The Secretary of State also gave this handy chart of how the money was moved within ISTA. 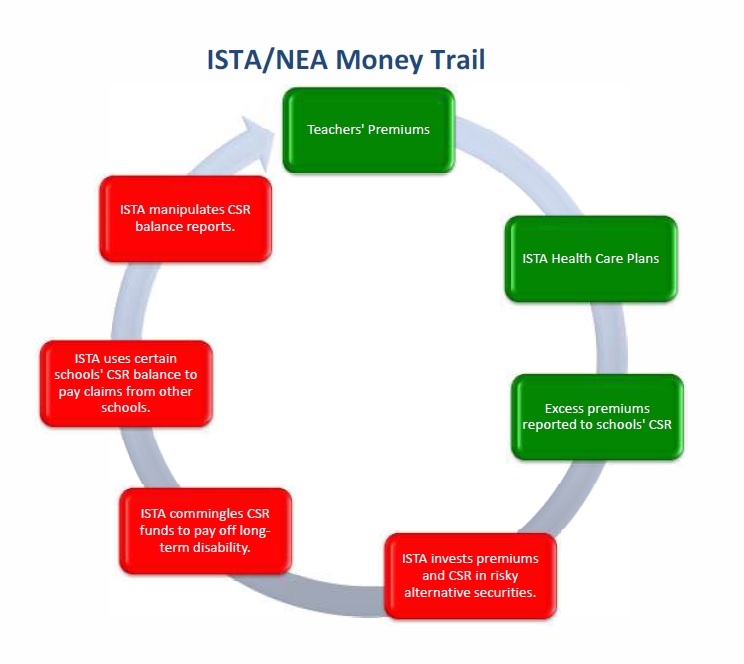 If you followed my reporting from the NEA convention last month, you know that the national union doesn’t have $14 million just lying around unused. There will have to be some financial tap-dancing to pay for this settlement, which means program cuts and/or more layoffs. As always, I need to emphasize that grants to affiliates and campaign spending all come out of segregated funds and will be unaffected by hits to NEA’s operating budget.