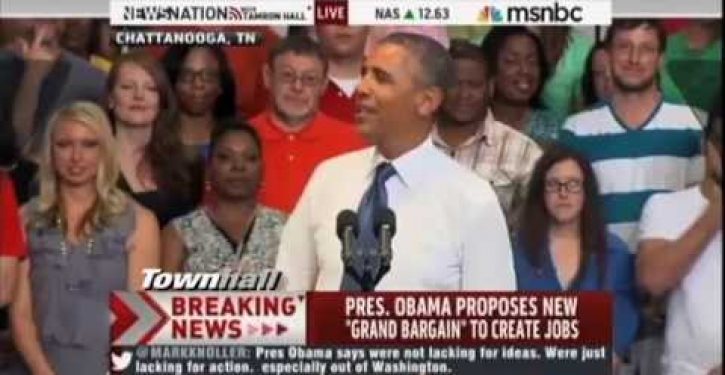 OK, the headline is perhaps premature. President Obama didn’t come out formally and declare that the Keystone XL Pipeline is off the table. But he came awfully close at his campaign whistle stop — er … jobs tour speech in Chattanooga. In typical fashion, he upbraids Republican lawmakers for not having his vision, which somehow enables him to see how “investments in education” will put the 7.2% of all Americans who are currently unemployed back to work in the foreseeable future.

But when he gets to actual counterproposals offered by his “enemies,” he scornfully addresses the plan so odious that he dare not utter its name, instead dismissing it as “this oil pipeline.”

You know, they keep on talkin’ about this … uh, an oil pipeline comin’ down from Canada that’s estimated to create about 50 permanent jobs. That’s not a jobs plan. Wasting the country’s time by taking something like 40 meaningless votes to repeal Obamacare is not a jobs plan.

As Guy Benson at Townhall reminds us, Obama told the New York Times in an interview just two weeks ago that “the most realistic estimates are this might create maybe 2,000 jobs during the construction of the pipeline.” But it matters little what he said then or now since both figures are cites are woefully inaccurate and at odds, more importantly, with estimates cobbled together by his own State Department, which, according to The Washington Post, declared:

[T]he project could ‘potentially support approximately 42,100 average annual jobs across the United States over a one-to-two-year period.’  State said the employment would translate into about $2 billion in workers’ earnings, $3.3 billion in construction and materials costs and $67 million in state and local taxes. That sounds like real money and quite a few jobs, at least in the short term.

For a man who has presided over the slowest economic recovery in the last 70 years, he has his nerve taking shots across the bow, especially when his catering to the green lobby — which he is clearly doing again — has come back to bite hjm and the nation so many times now.