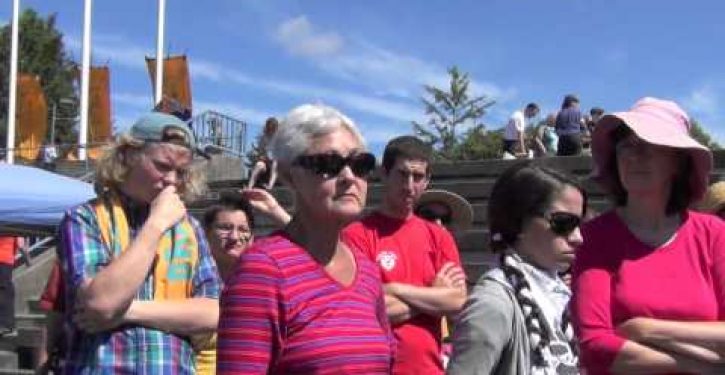 While gathering at Vancouver Landing in Vancouver, Wash. on Saturday, a small group of environmentalists called for bloodshed and violence to stop what they see as an encroachment by big oil and big coal, Jim Hoft reported at the Gateway Pundit.

Several activists felt violence may be necessary to get what they want, according to the video Hoft posted.

“Sometimes, you have to shed blood to win the war,” one activist said.

According to a YouTube by Laughing at Liberals (see below), the statements were made prior to a kayak flotilla organized by Portland Rising Tide, an organization describing itself as an “international, all-volunteer, grassroots network of groups and individuals who organize locally, promote community-based solutions to the climate crisis and take direct action to confront the root causes of climate change.”

Over-the-top rhetoric is not uncommon for environmentalist groups.

In October 2010, for example, we reported that environmental groups used violent death in an ad campaign intended to shock people into their way of thinking.  One ad featured a teacher blowing up children skeptical of global warming.

In August 2011, we reported that a book by three environmentalists called for an end to industrialized civilization.

In October 2011, we brought you the story of one movement that seeks to save the planet through voluntary human extinction.

Those who disagree with the radical aims of the environmentalists, according to Oregon professor Kari Norgaard, are sick and need to be “treated.”

Media mogul Ted Turner has also weighed in, calling for a global one-child policy similar to that used by China.

According to the Portland Tribune, the protesters oppose oil and coal-train shipments through the Columbia River Gorge.

Video of the comments can be seen here.