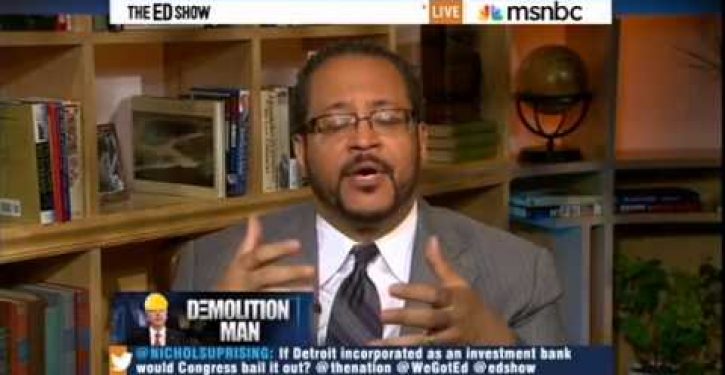 The post-mortems on the city of Detroit continue to filter in. For commentators at MSNBC, there seems to be a common thread running through the purported causes of the Motor City’s imminent demise.

On Friday Melissa Harris-Perry (she of the tampon earrings) blamed the city’s decay on “government [that] is small enough to drown in your bathtub.”

She didn’t elaborate on her thesis, though it is worth noting that the last time Detroit had a non-Democratic (i.e., small government) mayor was in 1962, when Republican Louis Mariani was defeated.

We have to acknowledge that part of this [decline] has to be the racial animus that has characterized that city for the last 50-some-odd years. [Detroit has] been perceived as a colony of black people who are ringed by suburban white areas that are now going into the city to plunder it.

Dyson may be onto something. Racism may indeed be a factor in Detroit’s current near-death state. But it’s not the brand of racism Dyson has in mind. Consider an article from the January 14, 2002 edition of The Detroit News. The piece begins:

It is an article of faith for many Metro Detroiters that the city’s decline can be traced to two events: the riot of 1967 and the election of Coleman A. Young in 1973. [Emphasis added]

The article quotes one L. Brooks Patterson, a native Detroiter who now lives in southeast Michigan, as saying, “The No. 1 culprit was the outrageous racism of Coleman Young.” But — big but — L. Brooks Patterson is white. His views are very likely colored (no, there is no other word) by race.

But what about Wilbur C. Rich, a Wellesley College professor and author of Young’s 1999 biography? Rich, who is black, is quoted in the same article as saying that Young didn’t much mind that whites saw him as hostile. According to Rich, “There was a perception that he was not going to protect white interests, and he didn’t do very much to disabuse them of that notion.”

Joseph Adams, a black insurance agency owner born and raised in Detroit, is also quoted. “Blacks began to challenge the power structure,” he says, “and eventually they won with the election of Coleman Young.” That gave blacks a feeling of power, Adams maintains, even as it frightened whites.

So, yes, Dyson is right. Racism helped kill Detroit. It just isn’t the flavor of bigotry he chooses to blame for all the world’s afflictions.