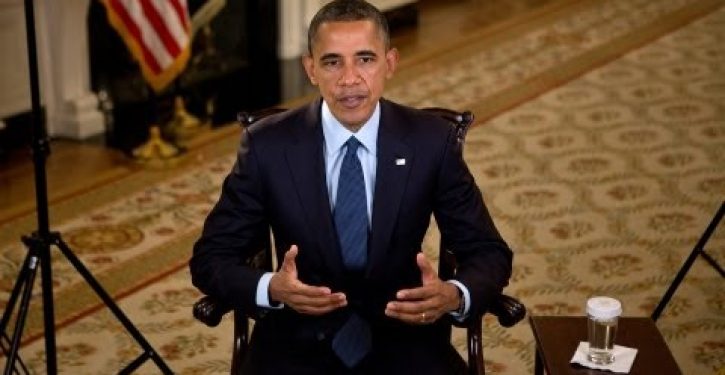 This is in no way to make light of Detroit’s plight, which is no laughing matter. Yesterday, the Motor City earned the dubious distinction yesterday of becoming the largest city in U.S. history to file for bankruptcy. The situation is tragic — especially for creditors and municipal workers, who can look forward to relinquishing 90% of what the city owes them.

It is, however, worth recalling a boast that President Obama made on Oct. 13, 2012, to emphasize his leadership savvy and bona fides as an economic whiz. The statement came during his weekly address from the White House, which isn’t a legitimate venue for campaigning, but when has that ever bothered this president.

CBS News acknowledged the speech at the time, writing:

President Obama on Saturday painted a strong contrast between his record on the auto bailout with that of his presidential rival Mitt Romney, touting his own refusal to ‘let Detroit go bankrupt.’

In his pre-taped weekly address Mr. Obama, referencing a 2008 op-ed in which Romney argued against bailing out the auto industry (entitled ‘Let Detroit Go Bankrupt’), outlined his administration’s efforts to save the industry upon being elected.

‘Just a few years ago, the auto industry wasn’t just struggling — it was flatlining,’ Mr. Obama said. ‘GM and Chrysler were on the verge of collapse. Suppliers and distributors were at risk of going under. More than a million jobs across the country were on the line — and not just auto jobs, but the jobs of teachers, small business owners, and everyone in communities that depend on this great American industry.’

It must have been a persuasive argument because on Election Night a month later, Obama carried Ohio, Michigan, and Wisconsin — all states that benefited from the auto bailout.

The rest of the country, of course, didn’t fare that well. Despite Obama’s promise that “the government will recover all of the taxpayer money used in the auto industry bailout,” his then “car czar” Steven Rattner appeared on CNBC after the election. When asked, “Do you think that the taxpayer is ultimately going to get paid back?” Rattner replied, “No, but we never said the taxpayer was going to get paid back.” That has never stopped Obama from promising to repeat the success of the auto industry bailout in other industries.