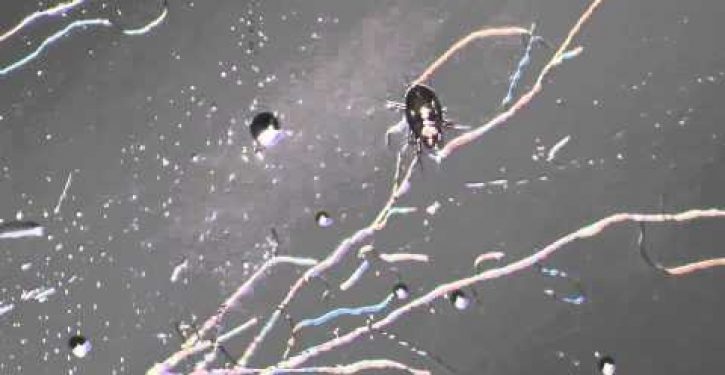 In April, we wrote about the U.S. government’s ban on the commonplace, perfectly healthy, normal-smelling French cheese Mimolette (which I once confused with cheddar while eating it in France). It is banning the cheese from the U.S. due to the presence of harmless cheese mites in its rind. It turns out that the ban may violate international-trade treaties. As the Washington Post notes:

For centuries, microscopic mites have been part of the process for making Mimolette, a mild-tasting cheese shaped like a cannonball and electric orange in color. For decades, the cheese has been imported from France and distributed to shops and grocery stores across the United States.

That is, until this spring, when the Food and Drug Administration began blocking shipments of the Gouda-like product at U.S. ports, leaving thousands of pounds of it stranded in warehouses from New Jersey to California.

The FDA says inspectors found too many cheese mites per square inch crawling on the cantaloupe-like rinds of Mimolette, raising health concerns. But it hasn’t explained exactly why it began holding up the cheese shipments after decades of relatively few problems. “The only thing we can do is cite our regulations, which show very clearly that our job is to protect the food supply,” FDA spokeswoman Patricia El-Hinnawy said.

Cato Institute scholar Simon Lester says the ban may violate treaties designed to protect international trade from attacks rooted in ignorance of science. He discusses the WTO agreement that “deals with ‘Sanitary and Phytosanitary Measures,’” noting that it is likely

that the FDA actions would be covered by these terms, and thus the agreement applies here. . . . Among other things, it requires that governments “shall ensure that any sanitary or phytosanitary measure is applied only to the extent necessary to protect human, animal or plant life or health, is based on scientific principles and is not maintained without sufficient scientific evidence … .” It also says that governments “shall ensure that their sanitary or phytosanitary measures are based on an assessment, as appropriate to the circumstances, of the risks to human, animal or plant life or health, taking into account risk assessment techniques developed by the relevant international organizations.” What these and related provisions mean, in a nutshell, is that these kinds of government actions have to be backed up by science . . . if there is a complaint under the agreement, a WTO panel hearing a claim under these provisions will consult with scientific experts to figure out what the science is, and then reach a conclusion on whether the measure violates the agreement (that is, if it is based on sound science). What does the science say here? . . .there is the following from the Post article:

“Rachel Dutton, a microbiologist who runs a cheese research lab at Harvard University, said people who handle cheese and come into contact with large amounts of mites have been known to have occasional allergic reactions. But she said she’s unaware of anyone getting sick from eating mites in cheese, which itself is full of various microbes that provide distinct textures, flavors and aromas. ‘I understand their desire to protect the consumer,’ Dutton said of the FDA’s caution. But ‘it’s true that these cheeses have been consumed for hundreds, if not thousands, of years with no apparent link to disease from the mites.’”

This is not some obscure cheese whose health effects are unknown. Its volume of consumption in France is such that if there were something unhealthy about eating the cheese, we would know it by now. It’s been consumed for centuries, without any ill effects, since before “King Louis XIV declared it the National Cheese of France.”

Banning cheese because it has microscopic mites makes no sense. Cheese itself is the product of bacteria. Good yogurt has live cultures of bacteria in it, and that is beneficial for your health. The human body is full of living, friendly microbes that keep us alive.

The Obama administration can be both ignorant and intolerant when it comes to food. Potatoes have more Vitamin C than apples or bananas, and all eight essential amino acids, but the Obama administration banned white potatoes from the federal WIC program (WIC money can be spent on far less nutritious things than potatoes, things that are starchy, fatty or sugary, like apple sauce, which has no nutrition unless vitamin C is artificially added to it, but a U.S. government official ignorantly urged parents to stock their fridges with apple sauce). There is nothing new about government stupidity in banning perfectly-healthy foods that officials are unfamiliar with. In 18th century France, regional parliaments banned consumption of the potato, leading to a short-lived national ban beginning in 1748. “Among the host of diseases the government mistakenly attributed to consumption of the tuber was leprosy.” Occasionally, government food-safety regulations are themselves a threat to public health, like the “poke and sniff” inspection method required by the U.S. Department of Agriculture (USDA) “that likely resulted in USDA inspectors transmitting filth from diseased meat to fresh meat on a daily basis.”

Previous Post
Intolerance and anti-Semitism: Britain jumps shark
Next Post
Obama warns Africans not to improve their lifestyle because 'the planet will boil over' if they do