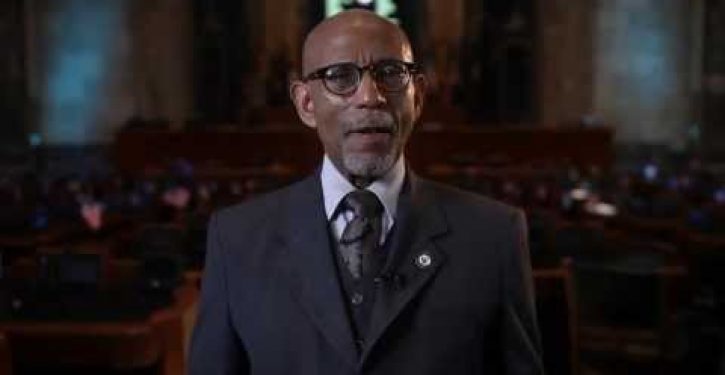 Former Democrat and current Louisiana Senator Elbert Guillory recently took to the airwaves to explain his change of political allegiance from the left to the right. You can watch his statement, which appears after the break.

“I don’t think it is a bold decision at all,” he begins. “It is the right decision, not only for me, but for all my brothers and sisters in the black community.”

Guillory goes on to weigh the respective historical records of Republicans and Democrats toward the black community and argues that “the idea that blacks, or anyone for that matter, need the government to get ahead in life is despicable … to be truly free is to rely on no one other than the author of our destiny.”

Here, courtesy of Real Clear Politics, is the transcript of his remarks.

Hello, my name is Elbert Lee Guillory, and I’m the senator for the twenty-fourth district right here in beautiful Louisiana. Recently I made what many are referring to as a ‘bold decision’ to switch my party affiliation to the Republican Party. I wanted to take a moment to explain why I became a Republican, and also to explain why I don’t think it was a bold decision at all. It is the right decision — not only for me — but for all my brothers and sisters in the black community.

You see, in recent history the Democrat Party has created the illusion that their agenda and their policies are what’s best for black people. Somehow it’s been forgotten that the Republican Party was founded in 1854 as an abolitionist movement with one simple creed: that slavery is a violation of the rights of man.

Frederick Douglass called Republicans the ‘Party of freedom and progress,’ and the first Republican president was Abraham Lincoln, the author of the Emancipation Proclamation. It was the Republicans in Congress who authored the thirteenth, fourteenth, and fifteenth amendments giving former slaves citizenship, voting rights, and due process of law.

The Democrats on the other hand were the Party of Jim Crow. It was Democrats who defended the rights of slave owners. It was the Republican President Dwight Eisenhower who championed the Civil Rights Act of 1957, but it was Democrats in the Senate who filibustered the bill.

You see, at the heart of liberalism is the idea that only a great and powerful big government can be the benefactor of social justice for all Americans. But the left is only concerned with one thing — control. And they disguise this control as charity. Programs such as welfare, food stamps, these programs aren’t designed to lift black Americans out of poverty, they were always intended as a mechanism for politicians to control black the black community.

The idea that blacks, or anyone for that matter, need the the government to get ahead in life is despicable. And even more important, this idea is a failure. Our communities are just as poor as they’ve always been. Our schools continue to fail children. Our prisons are filled with young black men who should be at home being fathers. Our self-initiative and our self-reliance have been sacrificed in exchange for allegiance to our overseers who control us by making us dependent on them.

Sometimes I wonder if the word freedom is tossed around so frequently in our society that it has become a cliché.

But most importantly, it is the idea that the individual must be free to pursue his or her own happiness free from government dependence and free from government control. Because to be truly free is to be reliant on no one other than the author of our destiny. These are the ideas at the core of the Republican Party, and it is why I am a Republican.

So my brothers and sisters of the American community, please join with me today in abandoning the government plantation and the Party of disappointment. So that we may all echo the words of one Republican leader who famously said, ‘free at last, free at last, thank God Almighty, we are free at last.’

So far there has been relatively little backlash to his act of perfidy from the left.

Previous Post
FBI Director Mueller admits drones in use in U.S.
Next Post
Obamacare and wasteful lawsuits drive up cost of health plans