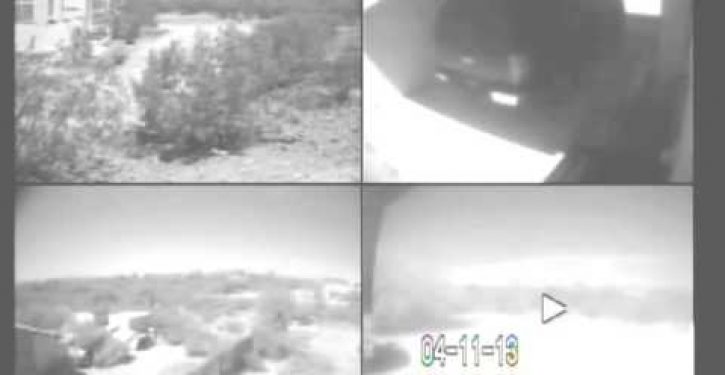 Dissent is the highest form of patriotism. So we were told repeatedly by the upstanding, nonviolent citizens who took to the streets in protest during the administration of George W. Bush. Such an individual is shown at the left, carrying a likeness of the former president, augmented by a Hitler mustache and swinging from a noose.

Where are those upstanding patriots now? Shouldn’t they be holding a vigil outside the White House, whose current occupant on April 11, 2013 allegedly dispatched Secret Service agents to the home of a private citizen whose sole “crime” was dissent against the Washington power structure?

The citizen is a man named Tom Francois. Judging from his presence on Twitter, Francois is a fierce (and occasionally obscene) critic of the current president. The frontispiece of his Twitter account, as a case in point, reads:

One day Obama will be dragged kicking+screaming Allah Akbar like a little b**ch for Treason, while his Sasquatch wife pounds on the agents screaming racism!

Some will argue — not unreasonably — that the comment is over-the-top. Some might even allow as how it is as inappropriate as many of the expressions of “patriotism” publicly displayed during the Bush years. In all cases, however, the views are protected by the First Amendment rights of their framers.

So why did the Secret Service pay Francois a visit on a date on which (he tweets) “the Boston Bombers were just finishing up their pressure cooker bombs unmolested”?

The reason, Francois claims he was told, is that “some nut case out there might read my posts and act on them.” Here is a paragraph that accompanies a YouTube video Francois posted on June 15 which captures the alleged visit on his home security cameras. The video follows.

Two of Obama’s Secret Service Agents paid me a visit on 4/11/13 because of my Twitter posts criticizing Obama. Searched, warned, harassed me. Totally unwarranted! Told me that some nut case out there might read my posts and act on them! Some people on Twitter wanted to see proof they actually came, even though I had posted the documents they had me sign for consent to search and release of health records. Hence this Video from my property security footage: They parked down the street. Went to front door of house, then back door, then Shop side door, finally shop front door. This was 4 days before the Boston Bombers struck! Who was watching them??? This is not America anymore. Hitler has been re-incarnated, and this time….he’s Black!

Harriet Baldwin of Examiner.com interviewed Francois and provides additional details of the visit. These include their asking Francois to sign consent to search his premises and an authorization to review his medical and mental health records. (He complied with both.) They asked if Francois had any intentions of “whacking” the President.” (His reply was “Of course not. I wish him no harm. I disagree with his policies and actions and I make no bones about it. It’s my First Amendment Right and I intend to exercise it.”)

The agents revealed that they were in possession of a thick FBI file filled with screenshots of hundreds of posts by Francois. They had additionally run a background check and found that Francois was the legal owner of two guns, which they asked to see. He again complied. “Are they loaded?” an agent then asked, to which Francois replied, “What good are guns if they aren’t loaded?”

Francois states that as they were leaving, one agent advised: “Keep in mind, if you step over the line, we’ll come back for your guns.” They then proceeded to pay a visit to Francois’s 22-year-old daughter.

So far, the White House has issued no response to Francois’s allegations or acknowledged that the visit occurred. Face facts: The security video Francois offers as proof could be staged using friends. Baldwin writes in her column that “the ‘Consent To Search’ and the ‘Authorization To Review Medical and Mental Health Records’ signed and dated by the special agents of the Secret Service were furnished to this reporter,” but she neglects to furnish the reader with copies of the same.

It is important to keep an open mind until further evidence is provided. But if the story turns out to be accurate — if the Secret Service did visit Francois on the premise that he was in violation of U. S, Code Title 18, Section 871 — then this is a serious matter. It is all the more serious if the visit was predicated on anything less than a perceived “threat to take the life of, to kidnap, or to inflict bodily harm upon the President of the United States,” which that statute covers.