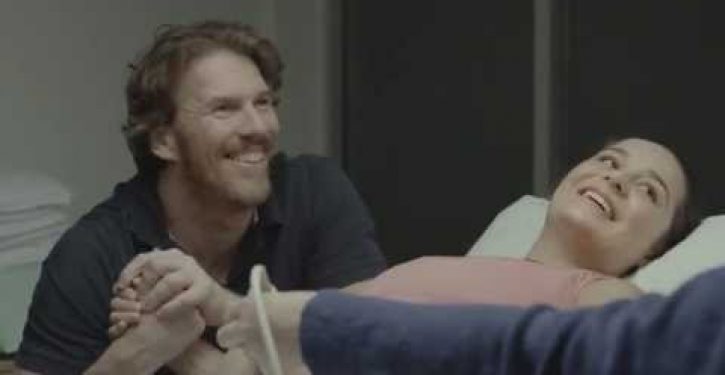 Suppose for a moment that the claim that children are “born gay” were totally accurate, rather than an oversimplification of the current science, which is inconclusive. Suppose, moreover, that genetic screening could test for the presence of gay markers in the DNA chain. Now suppose, finally, that you were part of an expectant couple who had just learned you would soon be the parents of a bouncing baby homosexual. How would you react?

The more vital question — how should you react? — is seemingly answered in an ad campaign sponsored by a group called Parents and Friends of Lesbians and Gays (PFLAG). In the YouTube video below, parents-to-be are told at the conclusion of an ultrasound that they are having a lesbian. Their response to this news is nothing short of unbridled bliss.

According to news.com.au, the campaign is part of an effort to raise awareness of and support for gay marriage in Australia, which voted against a bill to legalize same-sex marriage last September. The campaign also includes a billboard depicting the same couple but captioned “Congratulations, you’re having a lesbian.”

The relationship between support for same-sex unions and the nature (as opposed to nurture) hypothesis of the roots of homosexuality is unclear. But more vexing still is the apparent presumption that there is one (and only one) correct response to the news that your baby will be gay. To the creators of this ad, the idea that parents might be troubled about bringing a gay child into the world is not just distasteful but unenlightened.

But is it? Granted, opposition to same-sex marriage has been steadily declining as acceptance increases. But the “fight for equality,” as gay rights activists term it, is far from over. In fact, the term is lifted directly from the PFLAG website:

When PFLAG founder Jeanne Manford stood beside her gay son in a NYC pride march in 1972, she took a stand against discrimination in the fight for equality.

Is that really what loving prospective parents should aspire to for their unborn children — to make them crusaders in a fight? An unborn or even newborn baby is unable to answer for himself. But there are those who are able to speak for themselves and have done so. The question “If you had the choice between being gay or not, what would you choose?” was posed on the website Quora. The answers, if you bother to wade through all 66 of them, are pretty much evenly split. They are also anecdotal. Nevertheless, one of the more thoughtful responses is the first. The author, Ben Reimers, who describes himself as “just a passenger in my own head,” is clearly ambivalent about his homosexuality. He writes:

School wouldn’t have been so awkward. Instead of pretending to be homophobic to try not to arouse suspicion I could have actually been homophobic … or not. I might not have struggled through university as I came to terms with my sexuality. I may never have developed this extremely inconvenient fear of urinals. I almost certainly would never have been so depressed as to seriously contemplate suicide.

I’d probably be married by now, with children, instead of contemplating living the rest of my life never having them regardless of my desires. In fact, I wouldn’t have to deal with a government and a large proportion of society who don’t want me to have children, call me a bad parents without even knowing me, or want me to get married.

I would never had eggs thrown at me on the street or been yelled at from car windows for holding my partner’s hand. I would never been assaulted in a cab line for kissing my partner. I wouldn’t get strange looks for putting my hand on my partner’s knee. Hotels would never assume that we need two single beds instead of one king-size one and they wouldn’t ask (uncomfortably) when we’re checking in.

I would never have had to come out to my parents and risk disappointing them. In fact, I wouldn’t have to come out to anybody. Everybody would just assume I was straight so when they ask if I’m married I could say yes without hesitation or the risk of not answering the questions ‘what’s her name?’ I would never have to worry about people’s reactions.

When going to a hospital to see my partner I’d never have the risk of being turned away. I wouldn’t have to worry about my doctor’s opinions of my sexuality, and they wouldn’t treat me any worse than if they knew I slept with women. At the end of my life it would be much easier for my partner to make decisions for me, and if that’s in old age we’d be treated much better in joint care.

By the end of his ruminations, Reimers does make up his mind. But his answer, while optimistic, betrays a sense of pain and longing:

Ultimately I am who I am because of everything I’ve been through and, now, I wouldn’t have it any other way.

I wish that nobody else has to go through this bulls**t, but I don’t wish people weren’t gay or that I wasn’t. What I wish is that the rest of society could both get used to it and mind their own f**king business so we can all live our lives as we want.

It may be a sad reality or it may depend on whether one group’s “rights” trump another’s, but at the moment about the best gay lifestyle advocates can do is wish — as Reimers does — that things were different. They can certainly lobby for practical benefits, such as spousal leave, which most fair-minded people would agree they deserve. But demanding acceptance never works. They will simply have to wait for it.