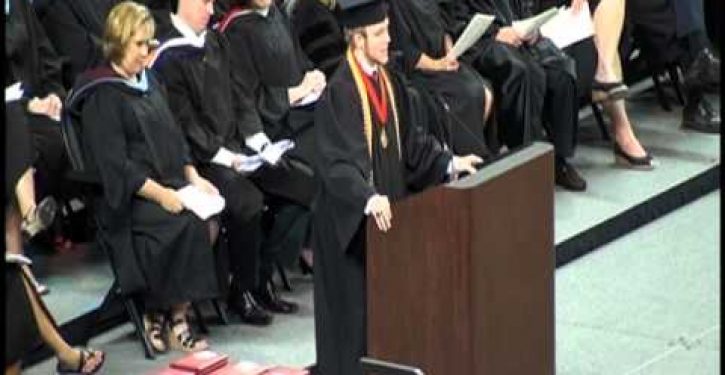 On Thursday, the Freedom from Religion Foundation, an anti-Christian organization that attacks public expressions of faith whenever and wherever it can, expressed outrage that Roy Costner IV, a high school valedictorian in Liberty County, S.C., ripped up his school-approved missive to engage in something called free speech.

That’s right, Costner did the unthinkable — he recited the (brace yourself) Lord’s Prayer.  In public.  Before a large audience, even.  Worse yet, the audience LOVED it and responded with loud cheers and applause.

But this, to the FFRF, simply will not do.

“The valedictorian who so insensitively inflicted Christian prayer on a captive audience at a secular graduation ceremony is a product of a school district which itself has set an unconstitutional example by hosting school board prayer,” said Annie Laurie Gaylor, FFRF co-president.

Notice the language used by the FFRF.  The boy, in the exercise of his God-given right to free speech and freedom of religion, “inflicted” prayer on the “captive audience.”

And it hurt so bad, they just HAD to respond with cheers and applause.

Watch the video and see for yourself just how bad the prayer hurt the audience.  You’ll notice that it was such a horrible experience that faculty members couldn’t help but smile in approval:

Turns out the group has been battling with local school authorities for quite some time.

FFRF, a Madison, Wis.-based state/church watchdog, began corresponding with the school board late last year after receiving complaints that the Pickens County Board of Trustees was scheduling students to lead Christian prayers to open its monthly meetings.

FFRF staff Attorney Patrick Elliot sent letters to the board on Nov. 26 and Feb. 25 objecting to the unconstitutional prayer practice. He pointed out, “The Supreme Court has continually and consistently struck down school-sponsored prayers,” and that two appeals courts have barred prayer by school boards.

As a result, the district decided to end all invocations and prayer at all functions, replacing them with a moment of silence.

But Costner was determined not to let the FRFF or the ACLU keep God out of his graduation.

“I’m happy with what I did,” Costner said. “I want this to glorify God. I want to use this as a witnessing tool and I hope others will stand up for God in our nation.”

Costner told Fox that he discussed the situation with his father and his youth pastor.  He also discussed it with other pastors in the area.

“They wanted me to make sure I was doing it for God and not myself,” he said.

So, he spent two days in prayer and Bible study, Starnes said.

“I asked God exactly what He wanted me to do,” he explained. “I was trying to think of a prayer that would suit all denominations. That’s why I went with The Lord’s Prayer.”

The rest, as the saying goes, is history.

As for his critics, Costner quoted a passage of Scripture from the Gospel of Matthew.

“If you deny me among men, I will deny you to the Father,” he said.

He also had a special message to the Freedom From Religion Foundation.

Costner plans to head to Clemson University in the fall to pursue a Bachelor of Science degree in computer science, according to a school publication.

The FRFF says it will “continue to monitor the situation.”