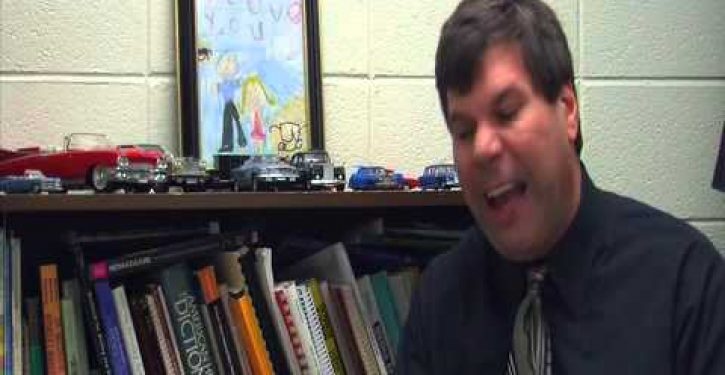 In a bizarre op-ed posted Thursday at the Charleston Gazette, Christopher Swindell, a journalism professor at Marshall University in West Virginia, falsely claimed the NRA “advocates armed rebellion against the duly elected government of the United States of America” and deserves to be executed by a firing squad.

Bryan Preston of PJ Media took Swindell to task for his comments, saying the professor’s initial statement is “a lie.”

“The NRA advocates fidelity to the U.S. Constitution,” Preston said.

“If he was a professor of history, he might know that even Benedict Arnold didn’t get the firing squad,” Preston wrote.

Swindell took a swipe at Sarah Palin, calling her a “half-wit half-term quitter,” and slammed the NRA for “choosing a white, rich old man” as president.

Swindell accused the NRA of treason twice in his article before invoking the race card.

“And many invite it gladly as if the African-American president we voted for is somehow infringing on their Constitutional rights,” he wrote.

After playing the race card, Swindell mentioned treason a third time, then suggested that military force be used against the NRA, while saying he would be willing to join the military to go after NRA members.

Swindell, however, wasn’t finished.  After calling for the military to murder NRA members, he jumped into the comment section and claimed that criticism of his call for violence “is off the mark.”  Readers, however, didn’t let him get away with it.

“Your article is not only grammatically incorrect, it’s repugnant and hateful.  But I guess it’s OK to be a hater if you’re a Liberal,” one person wrote.

Ironically, Swindell — who once falsely claimed that the Tea Party hates America because it disagrees with Obama — promised to “stop with the accusations and the name-calling” in 2011.  But now, Preston wrote, he’s “pushing for civil war to murder millions of law-abiding Americans who don’t happen to wear his political stripe.”

Swindell is not the first to advocate killing members of the NRA.

In addition to rank-and-file liberals on social media sites like Twitter, Swindell joins Democratic Party leaders like John Cobarruvias, Hollywood celebrities and liberal opinion writers in publicly expressing a desire to see fellow Americans murdered because they support the right to keep and bear arms.