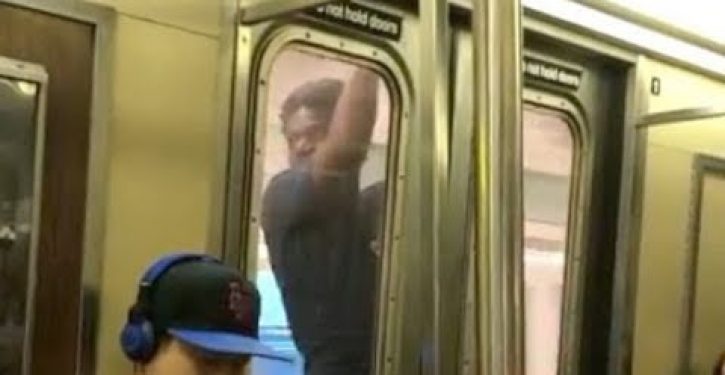 There were 55 subway-related deaths in New York City in 2012. This year’s list of fatalities appears destined to dwarf that number, thanks to the actions of a group of young thrill-seekers. CBS New York reports on a growing trend among males in their teens and twenties, who interact with subway trains in the most dangerous ways imaginable, then post videos of their performances online.

The stunts that have received the most hits to date include jumping across the tracks, playing chicken with trains, and “surfing” on moving trains. One of the most daring — and dangerous — routines was performed this past January by a young man known only as “Koki,” who leaped over the tracks in one station on his skateboard. The trick, known as an “ollie,” went viral after a photograph of it appeared in 43 magazine.

Another stunt that went viral was posted on YouTube in October. It shows a grinning young man in a baseball cap worn backwards hanging onto the door of a moving train from outside the car.

Despite the seemingly widespread appeal of their “work” to prospective imitators, not everyone in the Big Apple is convinced the stunts are the best PR for the city. Manhattan Borough President Scott Stringer said, “This game should be an embarrassment to New Yorkers. I don’t think we should let it go. I think we should prosecute people who do this because they are putting other people in harm’s way.”

Stringer wants the Metropolitan Transportation Authority to take steps to prevent teens from risking their lives and those of straphangers. On suggestion is to install platform edge doors and track intrusion detectors to ward off thrill-seekers.

The cost of the improvement has not been revealed, but the source of the funding — taxpayers — is a given.