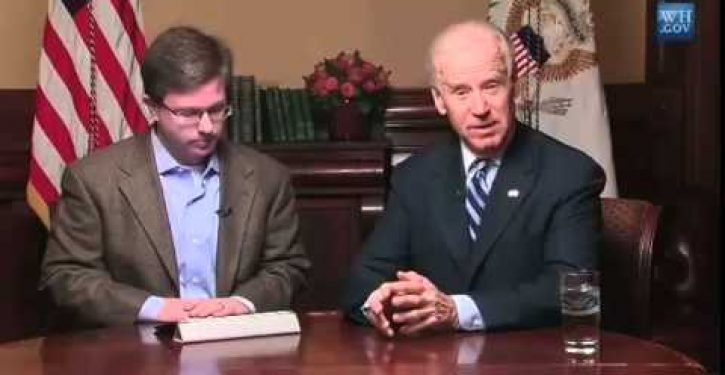 The debate over whether flouting the Second Amendment is the best way to curb gun violence has a new, moderate spokesman. The man in question is himself a gun owner, and his position is not that assault weapons are inherently evil. Rather, it’s that they are harder to aim and use than a trusty old 12-guage. His identity? Vice President of the United States Joe Biden.

In a recorded Q & A on Tuesday with readers of “Parents” magazine, the veep shared with a young mother the advice he has imparted to his wife, Jill:

If you want to protect yourself, get a double-barred shotgun … and I promise you … if there’s ever a problem just walk out on the balcony here — walk out, put that double barrel shot gun and fire two blasts outside the house — I promise you whoever is coming in … You don’t need an AR-15, it’s harder to aim, it’s harder to use…Buy a shotgun! Buy a shotgun! [Emphasis added]

Sounds like a plan. It’s even backed by a promise. Speaking of which, how would Biden complete the thought highlighted in the above passage?

Notice that there’s also a suggestion that perhaps frail housewives are not up to the rigors of firing an AR-15. If nothing else this seems to reprise the sexist insinuation about “gals and guns” made on the floor of the Colorado State House by a Democratic congressman.

As goofy as it is, I think this is actually kinda sorta effective at blunting the ‘gun-grabbing’ critique liberals naturally face whenever they get itchy about ‘assault weapons.’

It also gives the White House an out. When the president is attacked for run rough-shed over the constitutionally guaranteed rights of gun owners, he can always point to the video as proof that his administration has a nuanced position on gun control. (Or he can always refer critics to the official White House photo of him shooting skeet.)