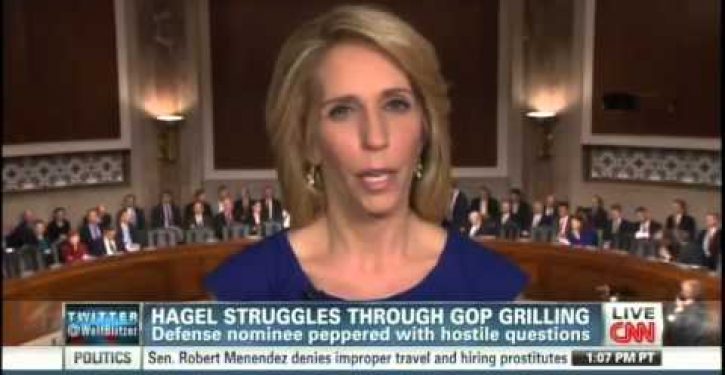 The quote in the title was part of the praise President Obama heaped on Chuck Hagel when he first announced his nomination of the former U.S. Senator to replace outgoing Defense Secretary Leon Panetta. Based on Hagel’s less-than-stellar performance during his confirmation hearing in front of the Senate on Thursday, one has to ask whether the president still feels that way and, if so, what he has against our troops.

Hagel was so out of his depth and unsure of his answers to even the most fundamental questions that at several points Democrats in the chamber needed to step in and correct or clarify the facts for him. One of his more embarrassing moments came when he avowed support for “the president’s strong position on the containment of Iran,” a statement Hagel walked back a short time later, explaining he’d been handed a memo and wanted to correct his answer, emphasizing that “we don’t have a position on containment.”

Except of course that the administration does have a position — which is to say it opposes containment. It fell to Sen. Carl Levin, Chairman of the  Armed Services Committee, to explain to this to Hagel.

Hagel did somewhat better fielding another question on Iran, this one posed by Sen. James Inhofe, who asked why Hagel thought the Iranian foreign ministry had strongly backed his nomination for Defense Secretary. Hagel deflected the question by quipping, “I have a difficult enough time with American politics and, Senator. I have no idea but thank you.”

But when all was said and done, the day probably ranks among those that Hagel most wishes he could forget. CNN’s Dana Bash reported “disbelief” among senators at how abysmally Hagel performed:

What remains to be seen now is whether the weak showing will reflect negatively on Obama or whether the president’s acolytes in the mainstream media will gloss over this angle as easily as they did the fact that the detention facility at Guantanamo Bay is now scheduled to remain open indefinitely.

Something else that remains to be seen is whether Hagel’s implosion yesterday will be sufficient to generate a no-confidence vote on his nomination.