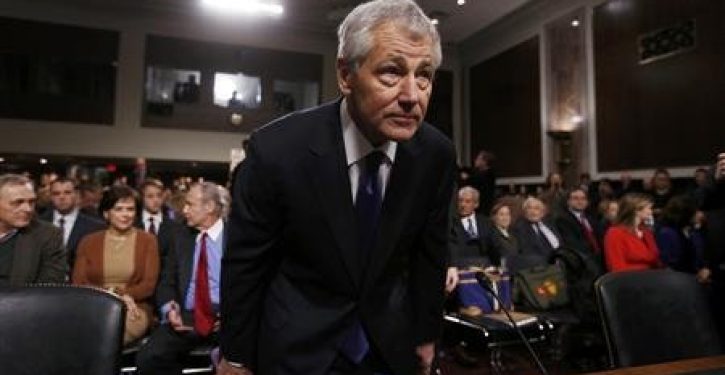 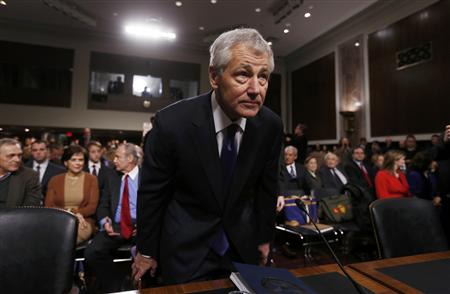 How badly did the nominee for Secretary of Defense flub his job interview today? Suffice it to say that if anyone was awarding him style points, he didn’t earn high marks on the strength of his erudition. Jennifer Rubin quips: “It is very clear from the testimony that Sen. Hagel will not be bringing the potato salad to the next Mensa picnic.” She then  moves on to the red meat course:

Sen. Deb Fischer (R-Neb.) did an immense amount of danger, disclosing that Hagel would still oppose unilateral sanctions. (How then could he possibly be the defense secretary in this administration?). Moreover, in reading his own words from the Global Zero report, she forced him to squirm, insisting the words she read didn’t mean what they said.

Even more damaging was the brilliant — there is no other word for it — interrogation from Sen. Lindsey Graham (R-S.C.) who challenged him to name one senator “intimidated” by the “Jewish lobby” and to name “one dumb thing” the United States did as a result of that intimidation. He couldn’t. Why did he say those things, then? The result of this exchange was to cast Hagel as a gadfly who speaks rashly.

And then came Ted Cruz:

with the al-Jazeera clips:

First, Cruz played excerpts from a tape of Hagel’s 2009 appearance on al Jazeera, in which a caller suggested that Israel had committed war crimes. In responding to the question, Hagel did not dispute the caller’s statement. Cruz also pointed to statement by Hagel that Israel had engaged in “the sickening slaughter” of Hezbollah, which sounds a bit like war crimes.

Taken together, these pieces of information show that Hagel regards Israel as a criminal state, or at least is comfortable with that characterization. Hagel tried, with the same lameness he displayed most of the day, to talk his way around this conclusion. He stated that both sides — Israelis and Hezbollah — had slaughtered each other. Perhaps Hagel will produce a tape in which he accused the Palestinians of engaging in a “sickening slaughter” of Israelis. Perhaps he will produce a tape (from the period before he was in the running for a cabinet job under President Obama) in which he took exception to the claim that Israel has committed war crimes. Perhaps, but don’t hold your breath.

Next, Cruz played an excerpt from the same interview in which the al Jazeera host read a reader e-mail claiming that the United States has served as the world’s bully. This time Hagel not only failed to take exception and stick up for his country, he said on al Jazeera he found some merit in the claim, calling it “a good observation” (the Washington Post report linked to above fails to report this fact).

Pressed by Cruz, Hagel tried to squirm his way out of this bit of anti-Americanism by misrepresenting both the email and his response. But Cruz brought him back to the text, which makes it quite clear that Hagel endorsed the view that America is the world’s bully.

Hagel’s testimony is an insult to the intelligence of the Senate and the American people. When he is confirmed, as I assume he will be (probably on a laregly party line vote), the Pentagon will be under the control of less than mediocre thinker and a less than honest man.

We’re in the best of hands.