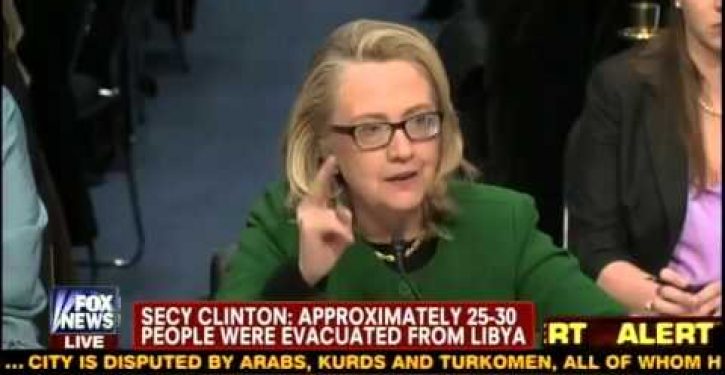 One line from Secretary of State Hillary Clinton’s testimony today before the Senate Foreign Relations Committee speaks volumes about this administration’s position on its own accountability. When pressed by Sen. Ron Johnson about the official explanation for the Sept. 11 attacks on the U.S. consulate in Benghazi, which turned out to be unsubstantiated, an exasperated Clinton fired back:

The fact is we had four dead Americans. Was it because of a protest or because of guys out for a walk one night one decided they’d kill some Americans? What difference at this point does it make? [Emphasis added]

Frankly, I had never before considered the “guys out for a walk” theory, which holds as much plausibility as the claim the White House and State Department pushed zealously for two weeks following the raid.

Nevertheless, Clinton’s rhetorical question is an interesting one. Not surprisingly, the White House has already come out in her defense. During a press avail following the testimony, propaganda minister Jay Carney told reporters that some in the media have had an “obvious political obsession over a series of talking points” and said the president agrees with Clinton that it is a moot point. (Carney also referred to her as “President Clinton,” which could be inadvertent tip of the hand, or it could mean he’s been hanging around Joe Biden too much.)

Despite Carney’s dismissal, the question of what difference it makes deserves, and is getting, attention in the blogosphere. Ed Morrissey maintains that it matters because of credibility. Certainly the mainstream media would be all over the statement had it made to defuse a false narrative advanced by a Republican administration.

But it also matters in terms of the outcome of the last election. Had the administration admitted early on that the raid was an act of terrorism, committed moreover by al Qaeda — an organization that he claimed he had decimated — he would have opened himself to attacks from his GOP opponent. It could have turned the tide of the election. In the grand scheme of things, telling the truth might have made a truckload of difference.