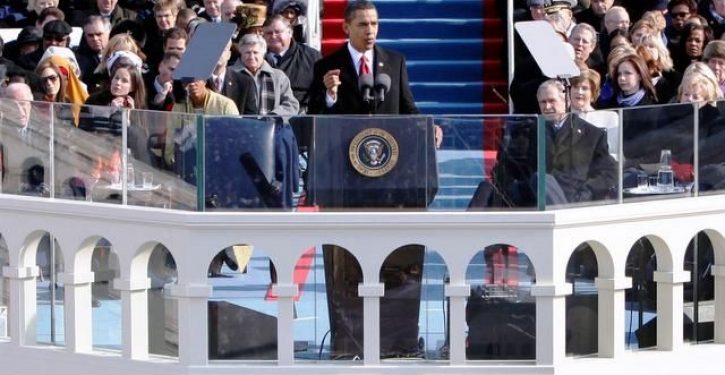 Reuters reports that Barack Obama officially kicked off his second term this morning with an inaugural address in which he called for an end to political “absolutism,” partisan rancor, and name-calling. Somehow, one gets the distinct impression that his advice was intended for his “enemies” (his word) across the aisle, not self-directed.

The article notes that this morning’s inaugural was scaled back in comparison to the “historic start of his presidency in 2009 when he swept into office on a mantle of hope and change” and that second-term expectations had been “tempered by lingering economic weakness and the political realities of a divided Washington.”

But the speech betrayed no sense that the president felt any responsibility for the discord, which is unfortunate.

He could have used the occasion to acknowledge, if not atone, for the many divisive and mean-spirited verbal volleys he has fired off at those with the temerity to disagree with his vision and solutions.

He could have reprised his now self-mocking comment about no “red states” or “blue states” as a preamble to one of his uglier first-term tirades. A good choice would have been his gratuitous assault in March of 2012 on those justifiably concerned about more “Solyndras”:

Let me tell you something. If some of these folks were around when Columbus set sail—[Laughter]—they must have been founding members of the Flat Earth Society [Laughter]. They would not have believed that the world was round [Applause]. We’ve heard these folks in the past. They probably would have agreed with one of the pioneers of the radio who said, ‘Television won’t last. It’s a flash in the pan’ [Laughter]. One of Henry Ford’s advisers was quoted as saying, ‘The horse is here to stay but the automobile is only a fad’ [Laughter].’

The sarcasm and snideness before a crowd of supporters has no place in any presidency, but it’s especially egregious from a man who can dish it out but can’t take it.