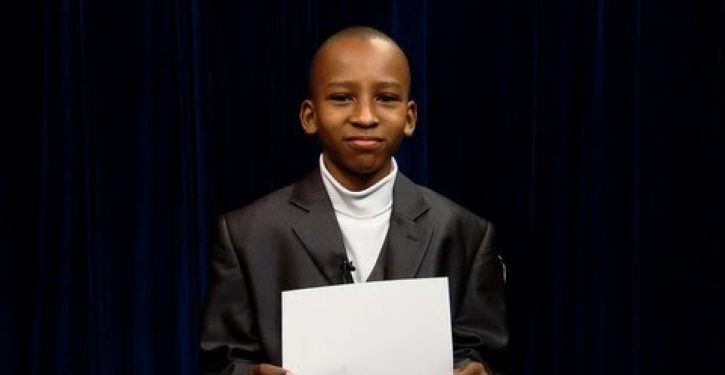 What’s that? You missed the president’s shameless stunt at the White House on Thursday in which he carted out four young children as a subtle but graphic reminder of the most tender victims of the Newtown massacre? No worries. On Saturday, the political-huckster-in-chief released the “movie version” for those who missed the original. The White House circulated videos of the same four little darlings reading aloud their anti-gun letters.

It was already despicable for Obama to exploit children as a backdrop for his political posturing, implying that his opposition on useless gun control laws somehow cares less about children. Now he’s taken the next step, trotting children out as spokespeople for his agenda.

With all due respect to Shapiro, he’s hardly plumbed the depths of the administration’s hypocrisy. The day before Obama signed 23 executive orders while the four kiddies looked on, his press secretary, Jay Carney, tore into the NRA for its 4½-minute ad that mentioned the armed guards at the school the president’s daughters attend. Groused Carney:

As James Taranto of the Wall Street Journal wrote, “That’s not quite accurate. The ad includes neither images nor the names of the Obama daughters.” But the president has little room to complain at any rate. As Taranto noted:

If the president wants his critics to refrain from even indirectly referring to his daughters, he ought to stop exploiting ordinary people’s children in this manner.

And now comes these videos, prompting Keith Koffler of White House Dossier to wonder in print whether “Obama will take this show on the road.”

By the way, give the administration credit for learning its lesson about diversity in its publicity stunts. After taking flak for its photo showing Obama’s all male inner circle, the administration was careful to choose a black child and two females, one of whom is non-white.