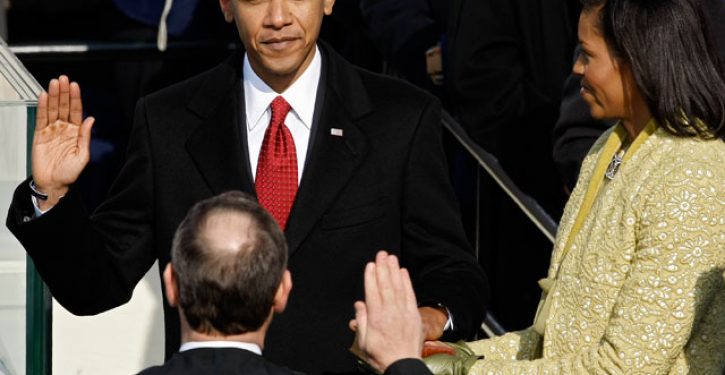 Just when you thought he couldn’t stoop any lower in his efforts at self-congratulation, the nation’s egotist-in-chief has done just that. The Associated Press reports that on Thursday the White House announced the addition of a new wrinkle to the otherwise drab and anonymous inauguration ceremony, in which the president-elect is sworn reciting the oath:

So what’s wrong with those 37 words, which are spelled out in Article II, Section 1 of the Constitution? None of them is Barack or Obama.

But this inauguration will correct that deficiency. The president has created “citizen co-chairs,” a role to be filled by eight Americans whose lives were made better by Obama first-term accomplishments.

Inaugural planners say the honorees include a woman with a brain tumor who no longer is denied health care for a pre-existing condition; an autoworker who got her job back after the General Motors bailout; and a gay pilot-in-training kicked out of the Air Force before the president repealed the military’s ‘don’t ask, don’t tell’ policy.

You might expect a man who believes so devoutly in fairness and equality to give equal time to people whose lives spiraled downward on his watch. He might feature the plight of one of the 84 percent of Millennials surveyed last August who claimed that their lives are on hold at least in part as a result of Obama’s policies. He could name as a “citizen co-chair” one of the 85% of small business owners who delayed hiring in 2012, citing expected costs from health care coverage and government regulation as their motivation. Their lives were surely negatively impacted by the actions of this president, and so were the lives of the hundreds of thousands of potential hires that were left to fend for themselves.