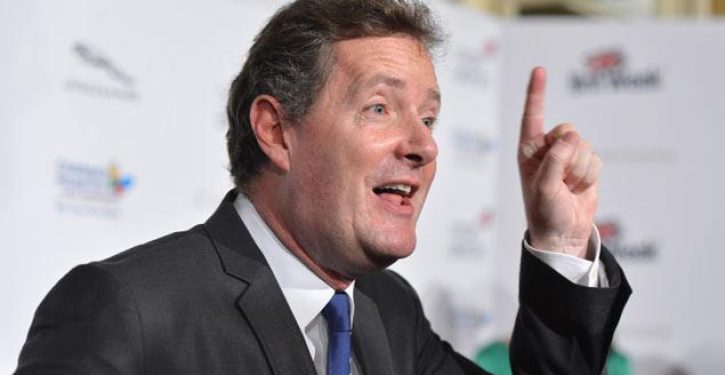 Having survived a petition demanding his deportation, CNN propagandist Piers Morgan is the target of a new petition — this time calling for the FBI to investigate him, his network, and others over a statement made by Buzz Bissinger, a writer at the Daily Beast.

“In uniform,” she said, laughing.

The exchange even prompted a smile from attorney Gloria Allred.

“The other guests laugh and say they’d like to see it. Without a doubt, this amounts to a veiled threat,” said Infowars’ Aaron Dykes.

The new petition, posted to the White House web site on Wednesday, says:

“We the people ask the Obama Administration to direct the Federal Bureau of Investigation to undertake an investigation of Piers Morgan, Harry Gerard (Buzz) Bissinger, Abby Huntsman and CNN; covered under Title 18, U.S.C., Section 241– two or more persons conspire to injure, oppress, threaten, or intimidate any person in any State, Territory, Commonwealth, Possession, or District in the free exercise or enjoyment of any right or privilege secured to him by the Constitution or laws of the United States, or because of his having so exercised the same; — for their comments made on CNN during Mr Morgans’ television show aired Jan 08/2013…”

In an article at Infowars, Dykes said Jones and his family were “terrorized” as they watched the exchange at home.

Earlier this week, Jones defended the Second Amendment on Morgan’s program in an appearance that could only be described as a “meltdown.”

“And I’m here to tell you. 1776 will commence again if you try to take our firearms,” he yelled. “It doesn’t matter how many lemmings you have out there on the street begging for them to have their guns taken. We will not relinquish them. Do you understand?”

While Jones may not have acquitted himself very well on the program, nothing he said or did warrants the call to shoot him with a semi-automatic weapon.

Imagine the firestorm if a conservative had said what Bissinger did.

According to the FBI, those found guilty under the law cited by the petition could face a “fine or imprisonment of up to ten years, or both.”

If death results from the violation, punishment could include a life sentence, or the guilty party “may be sentenced to death.”

Watch the video and decide for yourself if Bissinger and others went over the line:

Previous Post
Qur'an desecration trial thrown out of court, no retrial planned
Next Post
Eric Holder to stay on as AG as new evidence of his ‘jurisimprudence’ emerges