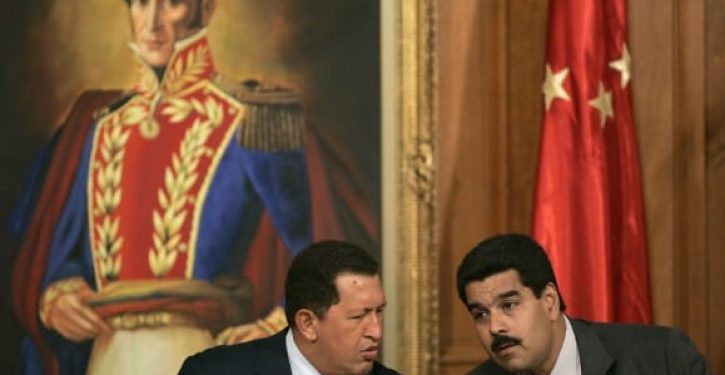 Now that Hugo Chávez doesn’t need to be sworn in to start his new six-year term, there’s this from The Washington Post:

With cancer-stricken President Hugo Chavez battling for his life, the Obama administration has embarked on a discreet but concerted weeks-long diplomatic initiative to open channels of communication with his sharply anti-American government.

The effort to break through a years-old deep freeze with one of the world’s top oil suppliers comes as Venezuela plunged deeper into an institutional crisis Wednesday over Chavez’s long absence since undergoing surgery Dec. 11 in Cuba.

But American officials have been preparing for a post-Chavez scenario, one in which they can engage Caracas on a variety of concerns the State Department has had about the Venezuelan government’s policies. They include the close alliance Venezuela has built with Iran, extensive narco-­trafficking through Venezuelan territory and prickly economic issues important to U.S. companies, such as their inability to repatriate earnings from here because of currency controls.

The premise is that Vice President Nicolas Maduro is “seen as a negotiator.”

Maduro is considered an ideologue close to Cuba’s Communist leadership and in lock step with Chavez’s long-standing policy of distancing Venezuela from the United States, which had been a close ally until his presidency began in 1999. As foreign minister, a position he still holds, Maduro has led Chavez’s campaign to forge closer ties with U.S. adversaries such as Iran.
…
On a practical level, the Venezuelan government stopped cooperating with Washington’s counter-drug operations and for years was accused of assisting guerrillas in neighboring Colombia, the closest U.S. ally in the region. Under Maduro’s watch as foreign minister, Venezuela became friendlier with pariah states such as Syria, Libya and Belarus.

That’s some negotiating, for a “pragmatist“:

What does ‘pragmatist’ mean in this context? The functional definition is: those with whom the Obama administration wishes to ‘engage.’ The substantive definition is: an anti-American who is willing to play the likes of Barack Obama, John Kerry, and Nancy Pelosi for suckers as long as no action is required to do so.

Then there’s the question of how long would Maduro stay in power, considering Diosdado Cabello’s position as head of the National Assembly.

What can possibly go wrong?