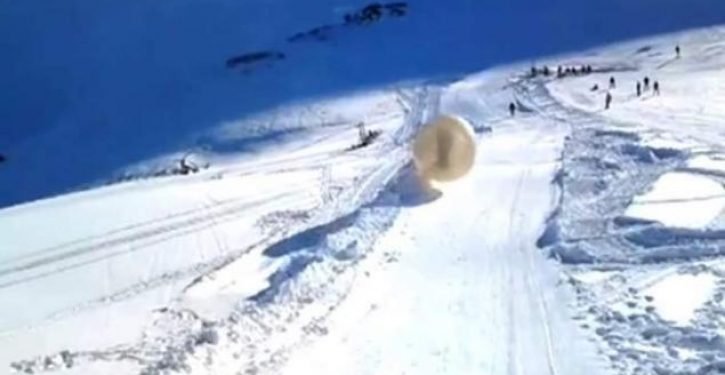 From bungee-jumping to planking to couch-surfing: There is no limit on how far thrill seekers will push the envelope, risking life and limb for that one ecstatic moment, however fleeting, of seeming invincibility. The latest sport, Zorbing, reports the Daily News, became “a tourist’s death trap” on Tuesday “when a Russian man and a friend hurtling down a snowy slope inside a large inflatable ball couldn’t stop — and plummeted off a cliff.”

The victim, 27-year-old Denis Burakov, suffered a broken neck and spine during the deadly descent. A married father of two, Burakov was rushed to a nearby hospital where he was pronounced dead on arrival.

The fatal plunge, which took place at the Dombai ski resort in Russia’s North Caucasus mountains, was captured on video. The footage captures the final seconds before the polyurethane sphere, having veered off course, picks up speed as it bounces along a craggy, rock-strewn path, then vanishes.

“Denis, you’ll be like Jackie Chan in the ‘Armour of God’ movie!” someone in the background can be heard yelling, according to a translation by the Russian newspaper Komsomolskaya Pravda.

Zorbing originated in New Zealand, which is where planking got its start.

Has anyone noticed Obama’s entire original economic team has bolted?
Next Post
Judges, not Hagel, should be denied Senate deference