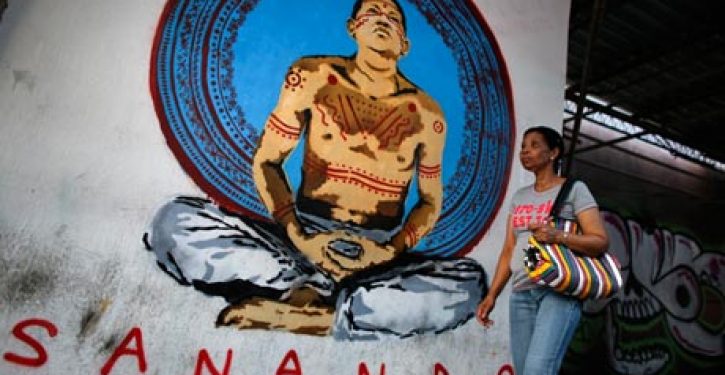 A raid has been conducted on the home of a Twitter user who is suspected of telling tales out of school about the health of Venezulan president Hugo Chávez, The Guardian UK reports. The “alleged microblogger, moreover, is believed to be a cousin of a prominent opposition journalist who has been critical of the Venezuelan government:

Venezuelan intelligence officers have raided the home of a Twitter user suspected of spreading destabilising rumours about the health of Hugo Chávez ahead of an inauguration that the ailing president looks increasingly unlikely to attend.

The alleged microblogger, Federico Medina Ravell is the cousin of a prominent opposition figure, prompting concerns that a long-simmering “information war” could be escalating as the government and its opponents try to fill the vacuum left by a leader who has not been seen or heard in public since he flew to Cuba for emergency cancer surgery a month ago.

Medina is the cousin of Alberto Federico Ravell, a well-known opposition journalist and co-founder of Globovision, a major news broadcaster and staunch critic of the Chávez government.

Medina, who was not at home, is accused of instigating terrorism through social networking sites. He is said to be behind the @LucioQuincioC Twitter account, which has claimed that Chávez will not return from Havana.

Fausta’s blog readers may recall that Globovision has been in Chavez’s cross-hairs for several years. In 2011 Hugo Chavez’s dictatorship fined TV channel Globovision US$2.1 million over its coverage of the deadly prison riots at Rodeo prison. The fine equaled more than 7.5% of the station’s annual revenues. Guillermo Zuloaga, Globovision’s majority owner, had to flee Venezuela in 2010, following Chavez’s constant threats against him and the station.

Meanwhile, as Cuba vies for control in post-Chávez Venezuela and other socialist heads-of-state plan to show up in Caracas for Chavez’s third inaugural (whether Chavez himself is there or not), the Venezuelan Catholic Church has said that delaying President Hugo Chavez’s inauguration would be a “morally unacceptable” violation of the constitution.