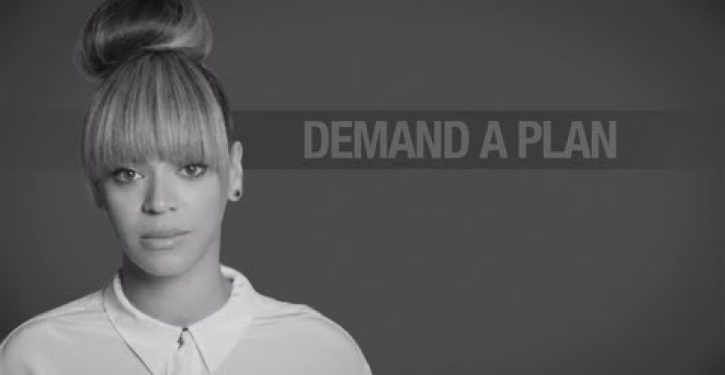 What is the correlation between graphic depictions of violence on television and in film and real violence? That depends. Most of the time, liberals will tell you that the connection is compelling. But when Hollywood elites make an anti-gun violence public service announcement that comes under fire for hypocrisy, the link suddenly becomes more tenuous.

Such a PSA recently emerged. It features some dozen celebrities like Beyonce, Jon Hamm, and Jamie Foxx, all gravely reciting the names of venues where mass shootings recently occurred.

The video, you will notice, is shot in black and white for a starker effect and ends with the question “How many more?” Finally comes the answer: “Demand a plan” from “our leaders” to do something about gun violence.

It’s all very compelling … if an exercise in classic liberal do-as-I-say-not-as-I-doism. Accordingly, a YouTube user that styles himself “ma5one” created a mashup, splicing together scenes from the PSA in which a given personality names a massacre juxtaposed against that same individual firing a gun or rifle on screen:

CBSNews writes of the mashup:

The idea appears to be to point out the hypocrisy of celebrities calling for gun control while using violent, gun-fueled images to advance their careers.

Appears to be? The article goes on to note, if unwittingly, the left’s fascination with the identity if ma5one, the creator of the response video. CBS points out that the Daily News calls “ma5one” a “gun rights activist,” while FOX News Channel’s resident liberal Bob Beckel said on The Five Wednesday that ma5one “doesn’t have the guts to give his real name.”

None of these purveyors of hard news explains how or why ma5one’s decision to remain anonymous is a problem. Would they prefer that he come out of the shadows so that, in the event he is a gun owner, The Journal News can publish his address? And what, after all, is the purpose of that action, if not to incite crowds of ever-so-civil liberals to visit his home?

For a group that lectures its “opponents” on tolerance and peaceful behavior, liberals sure have a funny way of practicing what they preach.