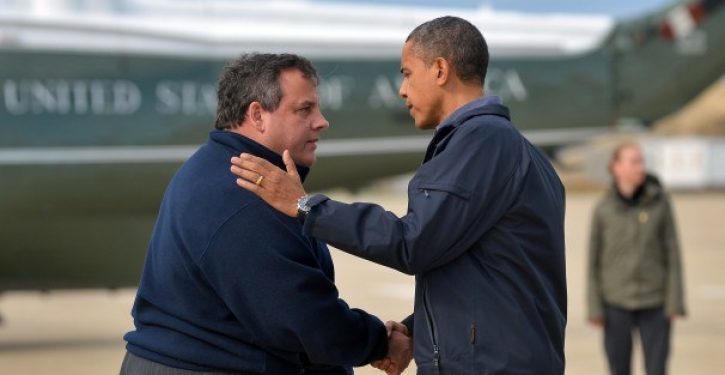 The New Year is scarcely underway, so it may seem premature for predictions, but here goes: Some time sooner or later (likely sooner) New Jersey governor Chis Christie will be making official his migration over to the Democratic Party.

The basis for the prediction is partly a function of who Christie has been in the past. First, there was his silly order to lower flags throughout the state to half-mast to commemorate the passing of singer Whitney Houston. Never mind that the performer died, if the earliest reports are to be believed, from drowning occasioned by a drug overdose. Second there is Christie’s chumminess with Newark Mayor Corey Booker, a Democrat.

The most telling clue that Christie is on the verge of jumping ship is his behavior in re Hurricane Sandy. This included his costly cozying up to Barack Obama days before the election, in essence endorsing the candidate from the opposite party.

Then there is his public lambasting of GOP Speaker John Boehner for not returning his phone calls on Tuesday, the day the House was embroiled in eleventh-hour debates over the fiscal cliff legislation that had been handed off to it. Apart from the timing of Christie’s hissy fit, there is the simple reality that whatever funds are allocated to reimburse the Garden State over damages resulting from the super storm, they are not going to materialize in some cases for up to a year or more.

In addition, a sizeable chunk of the $60.4 billion aid package is pork, not that that should surprise Christie or anyone else. Back in mid-December, the conservative Club for Growth and Heritage Action for America reported that the aid package is the typical kneejerk reaction of Congress to a natural disaster — to wit:

[T]hey cobble together an overpriced bill that isn’t paid for, there’s no accountability or oversight, and it’s filled with pork. This proposal is no different.

Included in the line costs are $150 million for fisheries in Alaska, $821 million for dredging projects across the country, and a generous emolument to the Environmental Protection Agency. None of these costs is storm-related.

Heritage projects that $28 billion, nearly half of the cash outlay, is earmarked for future storm prevention — perhaps a worthwhile endeavor but not an expenditure the country needs to undertake at this juncture.

Who but a tax-and-spend Democrat wouldn’t bother to familiarize himself with the contents of the bill before going off half-cocked? Look for Christie’s announcement in 3, 2, 1, …

Previous Post
One man with courage makes a majority: Meet our newest contributor, Mike DeVine
Next Post
Stop criticizing me!