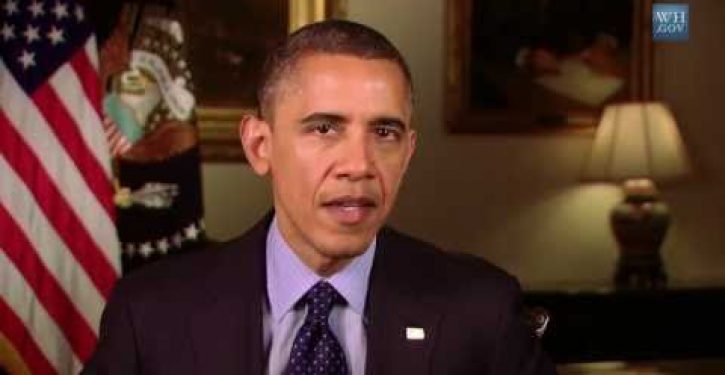 It must have seemed like an enlightened idea when it was dreamed up, especially for a once and current community organizer: Start up a page at the White House website titled “We the People: Your Voice in Government.” Urge the citizenry to petition the administration to make policy that genuinely reflects the will of the people.

So what’s the problem? There are many actually. First and foremost is that the right to petition, while enumerated in the First Amendment, is for “a redress of grievances.” The amendment also specifies that such petitions are directed at the “Government,” not just the executive branch. The difference between providing a platform for expressing opposition to tyranny and a “suggestion box” is not inconsequential, especially when the taxpayer is saddled with the cost of maintaining that suggestion box.

Second is the “threshold” — the number of signatures required before the administration takes action on a given petition. The original threshold was set at 5,000 signatures, which proved to be far too small a quorum and demanded too much in the way of staff attention. The threshold was thus increased to 25,000 on Oct 3, 2011. Yet, even that number is far too low to merit the time and expense required to monitor this page. The promise to broadcast legislative hearings on C-Span, which Obama made shortly after his election in 2008, would have been a cheaper and far more practical way of engaging the American people in the political process.

Third is the action itself. Step 3 of the “three easy steps” needed to get the president’s attention reads: “If a petition meets the signature threshold, it will be reviewed by the Administration and we will issue a response.” Even if the promise of a response were met, the gesture is meaningless since the response could be that the administration chooses not to act on the petition at hand.

Fourth and finally is the simple fact that responses have not been forthcoming, at least not to petitions that do not conform to Barack Obama’s ideology. After the election in early November, for example, petitions to secede from the union were filed in all 50 states. One filed in Texas (there were several) received more than 100,000 signatures. None was answered. In contrast, a petition filed after the shootings in Newtown demanding more stringent laws that would reduce gun violence received a nearly instantaneous affirmative answer.

For an administration that has used the word transparency more as a punch line than as a credo, a genuine effort to be more open and receptive — to listen to the voice of the people — would be most welcome in its second term. First dump the silly petition site. Related Articles