When Adolf Hitler wasn’t busy dreaming up methods of mass extermination for the millions of Jews and other “miscreants” his storm troopers had rounded up, he indulged in several hobbies, one of which was painting. Hitler is himself the subject of a new art work, not its creator, but the piece is stirring up some intense emotions.

It is a sculpture titled “HIM” and it was crafted by Italian artist Maurizio Cattelan. But it is not the subject per se that has caused outrage but rather the pose in which Hitler is captured and the chosen location of the statue. The former is on his knees, in prayer, and the latter is the onetime Warsaw Ghetto, the place where so many Jews were killed or sent to their deaths.

[The sculpture] is visible only from a distance, and the artist doesn’t make explicit what Hitler is praying for, but the broader point, organizers say, is to make people reflect on the nature of evil.

Yet, that explanation isn’t cutting it with critics, who find the work tasteless and an abomination. Efraim Zuroff, a spokesman for Simon Wiesenthal Center, an international Jewish advocacy group, said in a statement that “Hitler’s only ‘prayer’ was that they [Jews] be wiped off the face of the earth.” The statue’s placement, moreover, is “a senseless provocation which insults the memory of the Nazis’ Jewish victims,” he wrote.

Others have praised the work. Fabio Cavallucci, director of the Center for Contemporary Art, which oversaw the installation, said, “There is no intention from the side of the artist or the center to insult Jewish memory” adding, “it’s an artwork that tries to speak about the situation of hidden evil everywhere.”

The Hitler installation is just one in a retrospective of Cattelan’s work titled “Amen,” a show that explores life, death, good and evil. The other works are on display at the center itself, which is housed in the Ujazdowski Castle.

Controversy, religious and otherwise, is nothing new for Cattelan. He caused another sensation in Warsaw in 2000 when a gallery exhibited his work “La Nona Ora” — or “The Ninth Hour” — which depicts the late Pope John Paul II being crushed by a meteorite. Poland is both deeply Catholic and John Paul’s homeland. 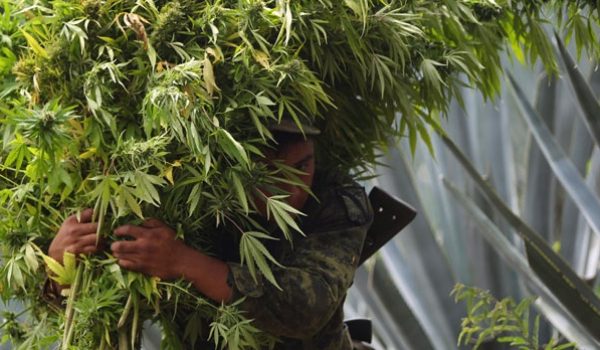