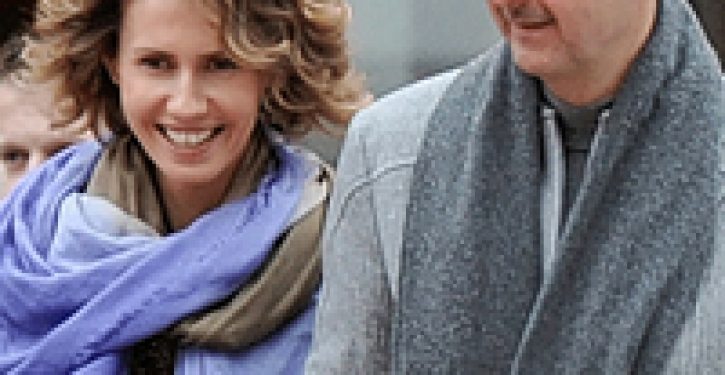 A little while ago, I was asking, Assuming Assad asks asylum . . . will he go to Cuba, Venezuela, or Ecuador? One commenter asked about Bolivia, too.

Assad Is So Out of Vogue that the Russians are distancing themselves:

The Syrian dictator has yet to be pried from power, but with the Kremlin sending war ships for a possible evacuation of Russian citizens, it may not be long before the Assads are passé. That’s good news, isn’t it? In the Middle East, “yes” and “no” are rarely correct answers.

We can say this: Assad’s downfall would be preferable to Assad’s survival. As U.S. Central Command chief General James N. Mattis told Congress last March, regime change in Syria would represent “the biggest strategic setback for Iran in 25 years.”

Hugo Chavez, who had those weekly direct flights from Damascus and Tehran to Caracas, is now in Cuba supposedly recovering from his fourth cancer surgery, but delegating some duties “related to the budget, expropriations and government debt” to Maduro, his VP. With the prospect of a prolonged post-Chavez power struggle, it’s unlikely that Maduro is willing to be welcoming Bashar and Asma anytime soon.

Cuba has much to lose when Hugo’s gone, and, considering that Russia’s turning its back on Assad, what is there for Cuba to gain by taking him in?

Ecuador, Nicaragua, and Bolivia are possibilities, but only if Assad can line a lot of coffers. Enough coffer-lining to justify a lot of unwanted attention?

Asma and Cristina Fernandez are big Louboutin fans, but Argentina’s got enough problems; let’s hope Cristina doesn’t decide to jump that shark. She’s not that crazy, is she?

One thing is clear: any country who welcomes the Assads will be signaling that it welcomes Iran’s meddling in its affairs, too.

Of course, all of this assumes that Assad’s own people are going to allow him to get out of the country. Now that the top general responsible for preventing defections within the military has become a defector himself, it may turn out that the Assads may not be able to reach the airport alive.

Benghazi: 4 Still on the payroll, resignations were fake
Next Post
Michael Moore: ‘Calm down, white people, and put away your guns’ (Update)